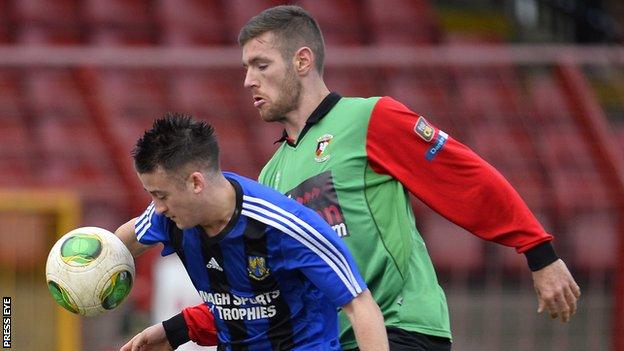 The Glens dominated the first half but didn't take the lead until Jay Magee's 44th-minute penalty.

However, the Glens lost their way in the second half and the lively Stephen Murray levelled for Armagh on 80.

Glens keeper Elliott Morris then made a great save to deny Philip Donnelly before Scullion's last-gasp winner.

With Aaron Boyd at the centre of most of their best work, Glentoran looked sharp in the opening period.

Armagh keeper Sean Morgan made a fine early save to deny Curtis Allen and the Glens striker then headed straight at the keeper when it appeared easier to score.

The Armagh keeper made an even better moment later when he dived full length to turn a Boyd shot on to the woodwork.

However, Morgan could do nothing about Magee's 44th-minute penalty which came after Armagh defender Dara Noonan was adjudged to have fouled Boyd.

But after bossing the first half, Glentoran struggled to maintain their form in the second period.

And with the Glens appearing to be content to merely hold on to their lead, the Championship side sensed an opportunity to get back into the contest.

Murray went close to levelling on 75 minutes as he fired inches wide after his own brilliant run.

However, the Armagh went did hit the net five minutes later as he pounced after some sloppy defensive work by the Glens.

At that stage, Armagh appeared the most likely winners as Morris had to make a brilliant save to block Donnelly's snapshot with Calum Birney denying Murray's attempted follow-up.

But Glentoran then produced their last-gasp salvo as McAlorum's shot on to the woodwork was followed by Scullion stabbing the ball home from close range after a William Garrett cross.