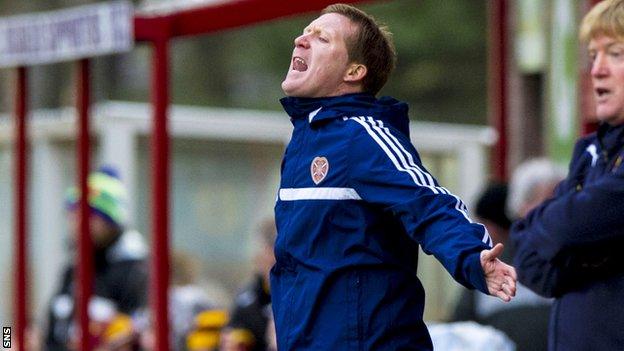 Gary Locke suggested Hearts recent good form had gone to waste as they lost 4-1 to Motherwell at Fir Park.

Callum Paterson's second-half header was the only bright spot as poor defending cost the visitors dearly.

"You're never going to win a game if only three or four players turn up. We've got to work hard all the time."

Iain Vigurs and Lionel Ainsworth had Motherwell comfortably ahead at half-time, but things could have been different had Dale Carrick scored instead of hitting the crossbar.

After that John Sutton and James McFadden hit the net either side of Paterson's consolation.

"At 2-0 if you get the next goal you're right back in the match," said Locke. "Dale does well, it crashes off the bar, and if that goes in it's a different game.

"We've got to make sure we compete all the time, and today we were second best in too many areas of the pitch.

"I don't think we adapted to the conditions well enough. The pitch wasn't great and we passed the ball in the first half without really causing them any problems.

"We kept the ball well enough but never ever looked threatening and they had more experienced players for them causing us all sorts of problems.

"We're young and we're learning all the time. You've got to work hard to get anything out of games in this league, and I felt Motherwell - especially McFadden and Ainsworth - caused us all sorts of problems and we just never got to grips with them."