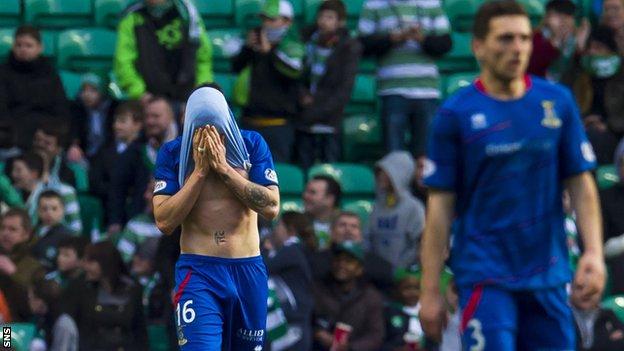 John Hughes expects Inverness Caledonian Thistle to recover from their with important cup games on the horizon.

"This is not going to define our season," Hughes told BBC Scotland.

"The next month is what our season's all about. We've got Dundee United next week in the Scottish Cup quarter-final.

"We've got the [League Cup] final against Aberdeen and we still want to win league games to try and finish as high up the league as we can."

"We left ourselves a little bit open," added Hughes.

"Some of the goals we conceded, it was poor on our part. We're better than that, especially with our clean sheet record. So, that was disappointing.

"You have to make sure that you keep your team shape and at times we were exposed.

"I felt one or two of the goals were really soft goals on our part. You have to be ruthless in your defending when you come to places like this.

"The 5-0 result, I don't think it will hinder the boys. You have to give credit where it's due. Celtic were awesome.

"If we can learn in defeat and take some of the stuff that Celtic do into our game, we'll be better for it."