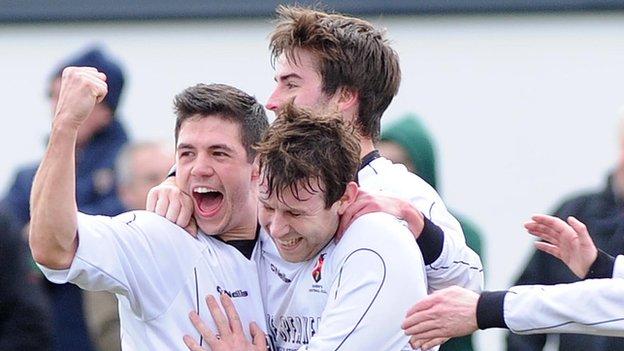 Irish Cup surprise packets Queen's University will face Ballymena United in the semi-finals on 5 April with Crusaders meeting either Glentoran or Glenavon in the other last-four clash.

Ballymena will represent the university team's first Premiership opposition in this year's competition.

Glentoran will meet Glenavon in the quarter-final on Monday, 10 March.

The draw at the Ballymena Showgrounds was greeted by huge enthusiasm by a small band of home supporters when the Braidmen's semi-final opponents became known.

However, Ballymena manager Glenn Ferguson insisted that his team would not underestimate the university outfit in the semi-final tie.

"If Queen's were looking at any of the other teams to face in the semi-finals, it probably would have been Ballymena," said Ferguson.

"Obviously, it gives us a great opportunity of getting through to the final but our mindset will be exactly the same as in any other game.

"We will treat them with the utmost respect. We know that it's certainly not going to be a walkover but obviously we are happy with the draw."