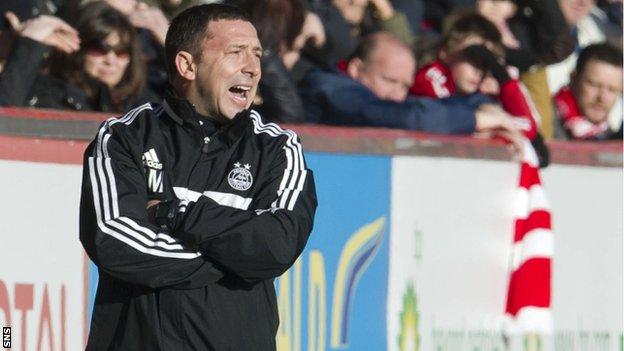 Aberdeen boss Derek McInnes admitted he should have made more changes despite at Pittodrie.

Ryan Jack's goal secured the Dons a second win in five days but McInnes says the season is taking its toll.

"There was obviously a bit of fatigue kicking about the team," he explained.

"We made a couple of changes to try and freshen it up, but in hindsight should have made a few more changes. A lot of boys are running on empty, they worked extremely hard."

Following on from Tuesday's win over Celtic, the Dons further cemented their hopes of finishing second in the Scottish Premiership with another three points.

Jack returned to the side from injury earlier than expected, and deceived goalkeeper Alan Mannus with a 25-yard shot in the eighth minute.

"We're always on at him to shoot more," said McInnes. "I think he's possibly wrong footed the goalkeeper but at least he's taken the responsibility to take the shot on.

"We were really keen to get him back in. He's trained a couple of times this week and he's trained well - yesterday he was outstanding, he was the best man on the training ground.

"We just thought it was an opportunity to get an hour into him ahead of some games that are coming up for us and I'm delighted he's managed to contribute with a winning goal."

Aberdeen now put the league campaign aside for a few weeks as they prepare for next Saturday's Scottish Cup tie with Dumbarton, before they face Inverness in the League Cup final at Celtic Park.

McInnes said: "St Johnstone will be kicking themselves because we weren't at our best and we were there to be got at, but our determination to win was the most pleasing thing. That's our 18th clean sheet and that doesn't come easy.

That's our 18th clean sheet and that doesn't come easy

"We've got a team full of winners, even the young lads coming on and giving us a spark at the right time. We've managed to get the job done and see it through.

"We've played St Johnstone three times prior to today and they've rarely created an opportunity, we've always kept a lid on them.

"But, they've had two or three real opportunities today that they probably think they should have done better with, but I thought we earned that right to be a bit fortunate.

"We said, 'let's get to 54 points'. It meant beating a good Celtic team and a good St Johnstone team so we're pleased with that.

"Hopefully we can now come back to the league on the back of a couple of cup victories. They're massive games for us."