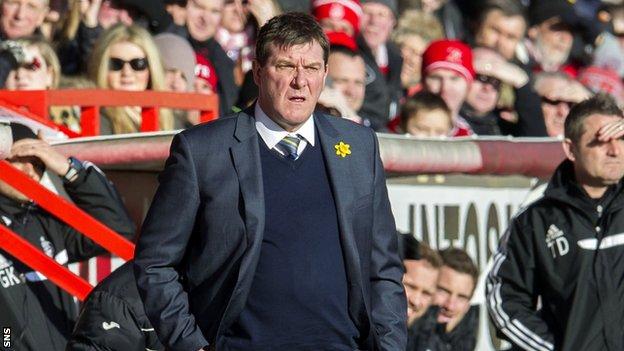 St Johnstone manager Tommy Wright felt his side deserved at least a point from their by Aberdeen.

"Anyone who was at the game will see that we deserved at least a point," Wright told BBC Scotland.

"Any luck that was going today was all bad for us. Overall I can't complain about the performance but the result certainly wasn't deserved."

Michael O'Halloran fired against the post and Saints had the better of the second half, but the visitors ended the match with 10 men after substitute MacLean picked up a second booking for a foul on Nicky Low.

"It's not a sending off," said Wright. "If we're going to book players, if that's going to be a second yellow every time, we'll end up with six-a-side or seven-a-side.

"I suppose I'm looking for a bit of consistency because there's a challenge from an Aberdeen player just after it, and we get the free-kick but he doesn't get a yellow card.

"It is a foul, but for that to be a foul and a second yellow card is harsh."

He added: "The goal is a poor goal from our point of view, I think we should have dealt with it. It goes through a crowd of players and [goalkeeper] Alan [Mannus] slips and then he can't get back across to it; he sees it late.

"We know the first goal in this league is really important. They [Aberdeen] are difficult to break down, they've got really experienced defenders and they work extremely hard, so to lose the first goal against them is always disappointing,

"Michael's shot that hits the inside of the post - I don't know how it stays out, it goes across the line. We've had numerous opportunities. They've defended well in terms of blocks."