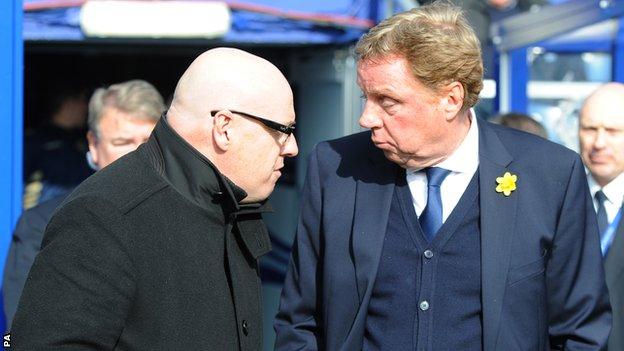 Harry Redknapp says he is the right man to take Queens Park Rangers back to the Premier League, despite his team taking only two points from the last 15.

Top scorer Charlie Austin has been injured since 31 January and QPR have not won since, including Saturday's 1-1 draw with Leeds.

But Redknapp said: "If it's not automatic promotion, we'll go through the play-offs.

"The chairman's not a silly man - he knows I'm the best man for the job."

Redknapp was unable to prevent Rangers being relegated from the Premier League, but did lead them to the top of the Championship after 10 games.

But they have since slipped to fourth, 17 points behind leaders Leicester and nine points adrift of second-placed Burnley.

But Redknapp added: "I will survive. I love what I do. I do it because I enjoy it. I don't need the money. I'm up at half past five in the morning because I want to be."

Redknapp says he was already looking to buy a striker in the January transfer window, before Austin injured his shoulder

Before then, Austin had 14 goals from 25 games. The club's next top scorer is Matt Phillips - who is also injured - with three.

Redknapp added: "Any fool who understands football would look at the injury situation. I needed a striker to play alongside Charlie Austin - then Charlie gets injured.

"The transfer window was difficult. We didn't get the targets we tried for.

"I lost three players to injury yesterday - [Benoit] Assou-Ekotto, [Niko] Kranjcar and Gary O'Neil. That's how it's been for us this season.

"It's not easy but I still think we can do it. I'd fancy us against anybody."