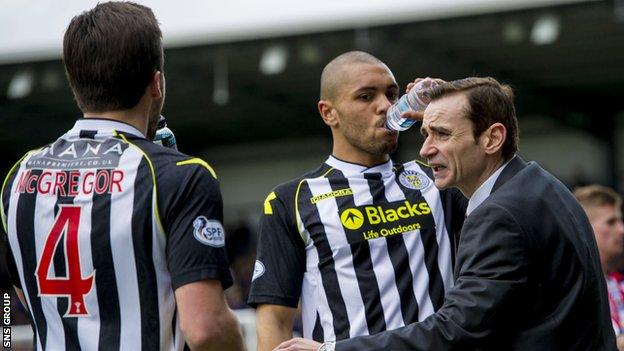 Manager Danny Lennon hopes St Mirren can build on a 2-0 win over Kilmarnock and start climbing the table rather than worrying about a play-off place.

"There was a lot of talk at training this week from myself and my staff and the players," he explained.

"Everyone wore their heart on their sleeves and I was absolutely delighted to see they carried that out there.

"The 13 players we used were prepared to defend in every area of the pitch and hunt for the ball."

Conor Newton and Gregg Wylde scored the second-half goals to move the Buddies level on points with the visitors but just one point covers the four teams above stranded Hearts at the bottom of the table.

"They were certainly committed and passionate and they certainly got their rewards," said Lennon of his players before expressing frustration at his side's inconsistency.

"This club for the last couple of decades had been surrounded by relegation and First Division football - there's a culture that means when we reached eighth spot it means we have a bit of breathing space," he added.

"And then when there is some doubt cast on the players they respond again.

"It's a mentality that we are working as hard as we possibly can to change.

"On our day, if our group of players can go out and put in that type of performance and commitment, we'll be fine."

Wylde typified the desire Lennon demanded, with the January signing from Aberdeen coming off the bench to set up the first goal and score an excellent solo effort late on.

Lennon said: "I have to compliment him. For not being in the starting line-up, he gives you the reaction that every manager wants out there.