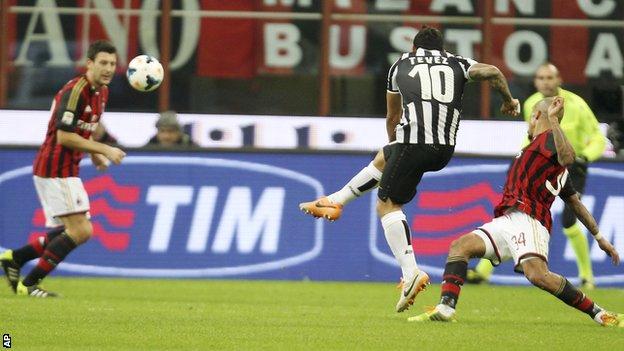 Juventus moved closer to a third successive Italian league title as victory at AC Milan put them 11 points clear at the top of the table.

Milan dominated the first half, with Kaka twice denied by the excellent Gianluigi Buffon in the Juventus goal.

But the visitors took the lead just before the break when Fernando Llorente side-footed in from Stephan Lichtsteiner's pass.

Carlos Tevez sealed victory with a fine 30-yard effort in the second half.

This has often been a fixture between two sides fighting for the league title.

But that was not the case this time as Milan started the day ninth, while Juventus were eight points clear of second-placed Roma at the top.

Despite that difference in the standings, Milan were by far the better side for much of the first half.

Adel Taarabt warmed Buffon's gloves early on before the Italian produced an even better save to thwart a close-range effort from Kaka, whose follow-up drive was cleared off the line by Leonardo Bonucci.

Kaka again forced a good save from Buffon with a curled effort from distance, and Milan's frustrations were to increase just before the break when Juve stole the lead.

Tevez fed a pass to Lichtsteiner inside the area, and his cut-back was stabbed in by Llorente.

The goal appeared to knock Milan's confidence, and they failed to take their first-half performance into the second.

Tevez sealed victory when he unleashed a powerful shot from distance that hit the underside of the crossbar on its way into the net.