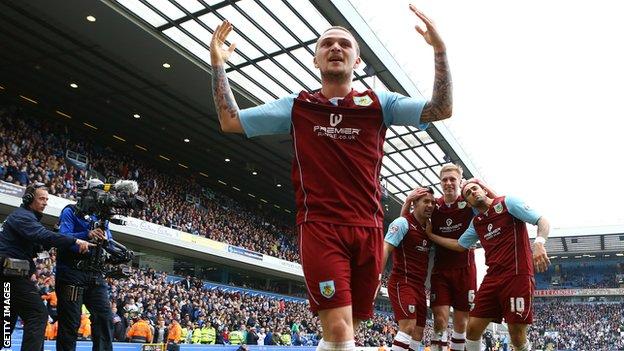 Burnley beat neighbours Blackburn for the first time since 1979 as they came from a goal down to win at Ewood Park.

Jordan Rhodes ended a nine-match scoreless run to give Blackburn the lead, and later hit a post.

But Burnley equalised through captain Jason Shackell, who headed in a Ross Wallace free-kick.

Danny Ings then struck his 25th goal of the season for Sean Dyche's side, who moved eight points clear in the second automatic promotion spot.

Yet even that was almost rendered insignificant by a first victory against their local rivals in any competition for 35 years.

This was the 101st competitive east Lancashire derby. Blackburn have won 41, while Burnley have 39 victories to their name.

This may have been only the 12th meeting between the east Lancashire clubs during that period, but the raucous scenes among the Burnley fans at Ewood Park were testimony to just how important this win was.

Burnley had come within seconds of ending their hoodoo last March, only to be denied by David Dunn's late equaliser, and despite their fine form Dyche had insisted that The Clarets - who were unchanged for the eighth match in a row - would not underestimate the threat of Blackburn.

The tension was heightened by a delay at the start of the game, when a chicken was released on to the pitch in a reference to Indian poultry company Venky's turbulent ownership of Blackburn.

However, Burnley started strongly, with Sam Vokes sliding home a Scott Arfield cross with seven minutes gone, only for the effort to be ruled offside.

Kieran Trippier then found an unmarked Arfield, who directed his header just over the bar, before Luke Varney tried his luck with a curling effort at the other end.

Blackburn top scorer Rhodes, without a goal since New Year's Day, let fly with a thunderous effort from the edge of the area as Gary Bowyer's side started to push forward.

Then Rovers' record signing controlled a Jason Lowe cross expertly and placed a shot in to the net to give the home side a deserved lead.

Ings had a golden opportunity to bring Burnley level, when Craig Conway's wayward pass fell to his feet on the edge of the area, but the forward shot straight into the arms of Paul Robinson.

Lowe again was in the midst of the action as he watched his close-range effort cleared off the line by Ben Mee seconds before half-time.

The last time Burnley overcame local rivals Blackburn was a 2-1 win on 14 April 1979.

Goalscorer Rhodes should have grabbed his second when David Jones's wayward back-pass fell at his feet, but he hit an upright.

Burnley continued to press and their equaliser came through Shackell, who rose highest to nod home substitute Wallace's free-kick.

The visitors, buoyed by their equaliser, pushed for a long-awaited winner. It finally came as Wallace's initial effort was blocked by Adam Henley before Ings got there ahead of team-mate Ashley Barnes to find the net.

"We didn't look too disappointed at going 1-0 down. I told the players at half-time that they were on the cusp of making history and that we should keep going forward.

"Danny Ings never stops and he got his rewards with a goal. He's a terrific young man and I value him as a person and a player.

"I'm delighted for the fans, who have waited a long time for this moment. And the same for the Burnley board.

"It's hard for me not to be excited at what we can achieve, but the players have to take it one game at a time, as I've told them all along."

"We're hugely disappointed to have lost. I thought it was harsh, but in football it is fine margins. Jordan Rhodes goes through one on one and hits the post.

"They [Burnley] are second in the league - you think they will get automatic promotion. That is what comes from having a settled squad like they do. It is something we have been working to and working very hard.

"My lads have to keep going. We have go again. People will probably write us off, but that is not the right thing to do. It is important we finish as strongly as we possibly can."