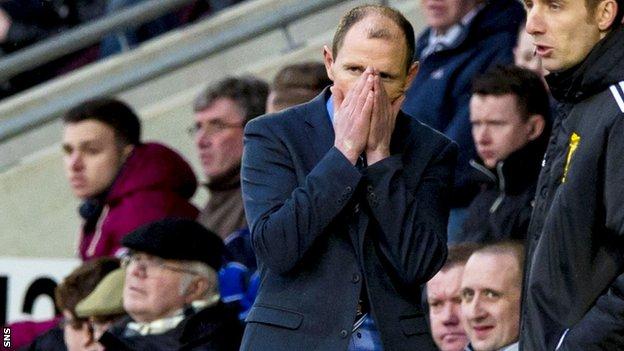 The Paisley side drew level on points with Killie and there is now just a point between Johnston's side in eighth and second-bottom Ross County.

"It was a massive game for us," Johnston told BBC Radio Scotland following .

"We could have pulled ourselves clear and it's test of character between now and the end of the season."

"It just shows you our luck today," reflected Johnston.

"Robbie Muirhead was unlucky with a couple of opportunities as well so it's really disappointing to lose the game."

Bottom club Hearts visit Kilmarnock next week and Johnston has urged his players to show the qualities needed to get a positive result.

"It's about how you react to a defeat," he added. "There's no point dwelling on it.

"We've got a massive game next week again and we've got to make sure we get three points and get ourselves away from this danger zone.

"There's a lot of big games coming up and the boys have got to show it on the park.

"When you've got someone of the quality of Kris Boyd up front, he's always going to score goals. We've just got to make sure that we defend properly at the back."