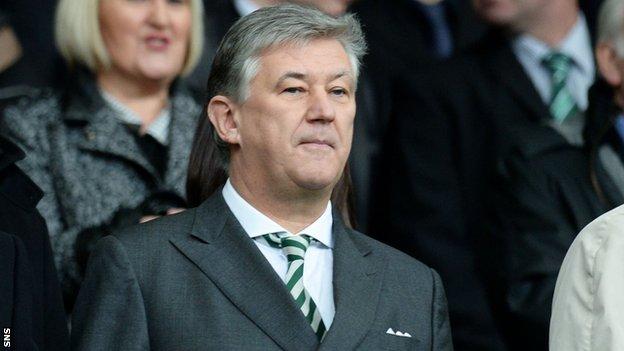 The reigning champions are 21 points clear at the top of the Premiership and are close to a third straight title.

Lawwell was speaking as the club honoured the 20th anniversary of Fergus McCann's takeover.

"The perceived lack of competition in Scottish football in the league is an issue that we need to find a solution to," Lawwell told BBC Radio Scotland.

"There are different challenges, different types of challenge but still big challenges for everyone in Scottish football.

"Things have changed over the last 15, 20 years, particularly in media values in the big nations that have gone beyond anyone's reasonable expectations.

"The gap between the big nations and the small nations is huge and we need to find a solution for Scottish football as well as Celtic in order to bridge that gap in some way or other.

"It's put Celtic and other Scottish clubs at a competitive disadvantage in terms of wages and transfer fees."

Canada-based businessman McCann rescued Celtic from the brink of bankruptcy in March 1994 when the club's credit facility was recalled by the bank.

The club's fortunes were subsequently transformed, both on and off the pitch, under McCann's five-year stewardship with Celtic Park rebuilt and the team winning their first league title in a decade in 1998.

And Lawwell believes the club are now "probably financially in the best position we've ever been in".

"We have the best facilities, we have a great management team, we've great executives at the club, the best sports science and one of the best recruitment functions in Europe," he added.

"So, we are in pretty good shape, there's no question about that."