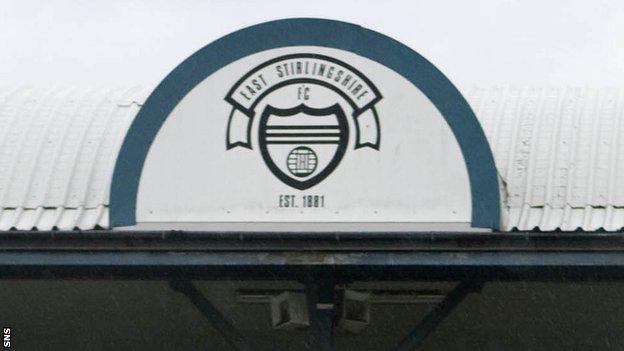 The Scottish League Two club described the incidents as having involved "a small number of spectators".

Tapping, 17, was substituted during Shire's 4-0 loss on Saturday.

"We have spoken to the match referee who has confirmed that these incidents will form part of his official report to the Scottish FA," said the club.

"The club can confirm that these incidents caused extreme distress to our player and this led to our coaching staff substituting the player from the field of play to protect him from any further possible recurrence of this abuse.

"Peterhead FC took immediate steps to identify the culprits and Jordan received a personal apology from their chairman, Rodger Morrison. East Stirlingshire FC will lend every assistance possible to Peterhead FC in trying to pick out those responsible.

"Furthermore, the club will be contacting the SFA and the Scottish Professional Football League to highlight what has happened and to urge them to take whatever steps are necessary under their rules to deal with the matter.

"Above all, though, the club has offered its complete support to Jordan and his family after what has been a very distressing episode."

Club secretary Tadek Kopszywa added that the 17-year-old had been "visibly upset by the incident" at Balmoor Stadium.

A police spokesperson said: "Racial abuse in any form is not only completely unacceptable, it is also criminal.

"We will be liaising closely with both football clubs to thoroughly investigate this incident which, at this time, would appear to have involved a small minority of people.

"We ask any supporters who saw or heard anything of a racist nature to get in touch with Police Scotland."