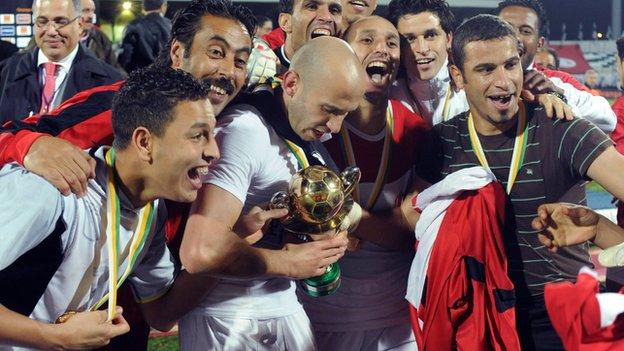 Nigerian clubs Warri Wolves and Bayelsa United are in a strong position to progress in the Caf Confederation Cup after good away results at the weekend.

Wolves triumphed 3-2 at Cameroonians Union Douala and Bayelsa forced a 0-0 draw at Congolese Kondzo in the first round, first leg qualifiers.

Warri, who failed to get beyond the second round in two previous Confederation Cup appearances, overcame pre-match setbacks to succeed against Douala. The Nigerians were forced to switch hotels in the lead up to the game, but still looked strong.

Musa Najare gave Warri an early lead. Patrick Ngoula levelled before Nigerian goalkeeper Okiemute Odah saved a Djengue Moundi spot-kick. Oghenekaro Etebo put Wolves ahead before half-time only for former African champions Union to level again on 80 minutes through a Ngansop Mangaptche header. But the Nigerians were not to be denied and Ibenegbu Ikechukwu snatched the match-winner seven minutes from time with a 30-metre scorcher.

Bayelsa, semi-finalists in their previous appearance five years ago, put up a strong defence against African rookies Kondzo in Brazzaville, drawing 0-0.

How Mine of Zimbabwe also look to be heading to the round of 16 having built a 5-1 lead over Seychelle's Saint Michel United in Bulawayo. Kuda Musharu lifted his goal haul to five from three matches by bagging a brace and Thembani Masuku, Morris Kadzola and Menard Mupera also scored. Malagasy Jocelyn Fenosoa levelled for Michel during the opening half, but after the Miners moved ahead again on the hour mark there was no way back for Saint Michel.

SuperSport of South Africa scored late in each half for a 2-0 home win over Kenyans AFC Leopards. David Mathebula rose highest to head a Sameegh Doutie free-kick into the far corner on 43 minutes and substitute Bennett Chenene netted from close range in stoppage time. After three preliminary-round goals, Senegal-born SuperSport striker Mame Niang drew a blank, but he did create the potentially tie-clinching second goal.

Elsewhere, Ayoub Nanah struck twice during the second half in Banjul as Jadida triumphed 2-0 over Gambian club Gamtel.

In Lubumbashi, Eric Kabulo bagged a brace, enabling Don Bosco to come from behind and defeat Malians Djoliba 2-1.

There were 1-nil victories for CARA at home to Tunisians Etoile Sahel,Constantine away to Liberians Red Lions and Kigali against Sudanese visitors Al-Ahly Shendy.