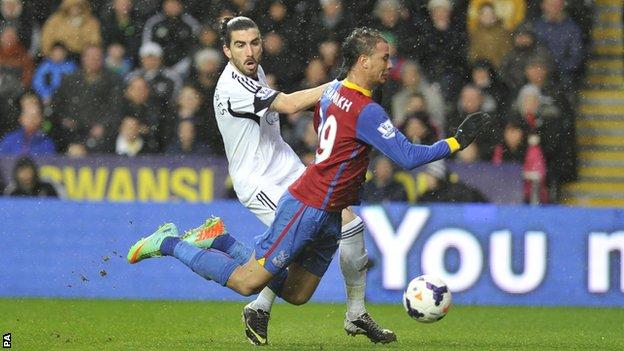 Crystal Palace manager Tony Pulis says he will fine Jerome Thomas and Marouane Chamakh for diving during the 1-1 draw with Swansea.

Winger Thomas was booked in stoppage time by referee Mike Dean and Pulis said striker Chamakh got away with a similar offence earlier in the match.

Pulis said: "They'll pay money for that. They will both be fined.

"It's a disease. It's one we're almost rid of but if people do it, they've got to be reminded it's not right."

Substitute Thomas tried to persuade Dean to award another spot-kick in the closing seconds of the match but was shown a yellow card.

Pulis said he and Thomas apologised to the referee after the match at the Liberty Stadium.

He said: "It's something I'm very strong on. I've been in to see Mike and JT waited for him to apologise at full-time."

Palace's leveller came from Glenn Murray after the substitute striker was tripped by Chico Flores on the edge of the box.

The Spanish defender was sent off and Swansea played the final 10 minutes a man down.

Swansea argued that contact had been made outside the penalty area but Pulis said the penalty decision was correct.

Pulis said: "The first touch might have been outside but I think it carries on and he catches him inside the box."