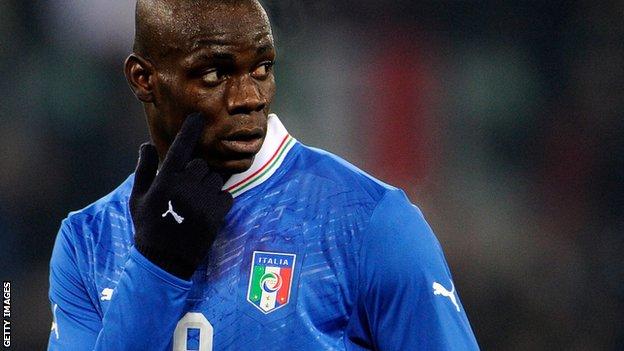 The World Cup in Brazil is only 95 days away, with the opening match between Brazil and Croatia taking place in Sao Paulo on 12 June.

Andy Brassell: "After missing Italy's narrow defeat in Spain this week, Mario Balotelli returned for AC Milan after a fortnight's absence with a shoulder injury in Saturday's defeat at Udinese.

Mario Balotelli has scored four goals in his past five competitive appearances for Italy. He netted against Mexico and Japan in last summer's Confederations Cup before World Cup qualifying goals against the Czech Republic and Armenia.

"Balotelli's lively 27-minute cameo came at an opportune moment, with the rivals for his place in Cesare Prandelli's Italy side mounting up. Dani Osvaldo, loaned to champions Juventus by Southampton, started Wednesday's loss in Madrid, while Roma's in-form Mattia Destro and debutant Ciro Immobile, of Torino, also played roles.

"During Balotelli's all-action turn, in which he came close from a trademark free-kick and created opportunities for an equaliser that Giampaolo Pazzini and Keisuke Honda both spurned, he showed exactly how he can invigorate the final third - for club and country - in the way few can."

Andy Brassell: "Friday brought confirmation that the Ukrainian Premier League will finally restart next week, after two weeks' delay caused by the grave political situation in the country.

"It's been a time of concern and uncertainty for overseas players playing there, and the resumption is good news for a couple of participants in this week's international friendlies, as they begin to fret over their form and status ahead of the World Cup.

"Brazil midfielder Bernard, of champions Shakhtar Donetsk, was an unused substitute in a 5-0 win for Luiz Felipe Scolari's side in South Africa this week, and said it has been hard to keep his mind on the job. 'It's difficult,' the erstwhile Arsenal and Tottenham target told Brazilian newspaper O Globo. 'People are worried, and don't know what to expect. It's hard to concentrate but I'm trying, as much as possible, to stay calm and get on with my job.'

"Portugal's Miguel Veloso plays for Dynamo Kiev, whose Olympiiskiy Stadium is a short walk from the epicentre of the protests. With strong competition in Portugal's midfield - not least from Manchester United target William Carvalho - Veloso needs to play.

"'We just hope the [political] situation is resolved as quickly as possible because it's not good for anyone [in Ukraine],' said Veloso."

Samba superstar Neymar had an enjoyable evening in South Africa, drawing plaudits for his exploits during - and after - Brazil's easy victory in Johannesburg.

First, the Barcelona attacker netted a devastating hat-trick to walk away with the matchball and then endeared himself to the home crowd by carrying a young spectator, who had run on to the pitch, to meet his Selecao team-mates.

But the international break was not as fun for Mesut Ozil, who was booed off the pitch by home fans as Germany laboured to a 1-0 win against Chile in Stuttgart.

However, the pair's return to club football saw a reversal of fortunes. Ozil netted in Arsenal's 4-1 FA Cup win against Everton, while Neymar missed a sitter as Barcelona suffered a shock 1-0 defeat at lowly Real Valladolid.

Cristiano Ronaldo became Portugal's outright record scorer with a brace in Wednesday's 5-1 win against Cameroon - and then added his 38th goal of the season as Real Madrid cruised past Levante at the weekend.

The Ballon d'Or winner scored his 48th and 49th international goals to move clear of ex-PSG striker Pauleta at the top of Portugal's all-time goal chart.

There have been calls for Russia to be kicked out of the World Cup following the country's move into the Crimea region of Ukraine. A European Union official told the BBC's Chris Morris in Brussels that it might try to have Russia thrown out, while two American senators have written to Fifa to request they be banned, as well as stripped of hosting the 2018 World Cup.

The battle for forward places in the Spain squad has heated up this week. Atletico Madrid striker Diego Costa made his second international debut against Italy in under a year. The 25-year-old, who played for his homeland Brazil against Italy and Russia last year, made his Spain bow on Wednesday after switching allegiance.

However, club-mate David Villa, who was left out of the squad for the international friendly, scored twice for title hopefuls Atletico in Saturday's 2-0 win at Celta Vigo to boost his claims for a recall.

The former Ajax, Real Madrid and Milan player was not given the opportunity to impress after being left on the bench for the midweek friendly defeat by France.

But, after returning to his German club Schalke, the 30-year-old boosted his World Cup credentials with a hat-trick against Bundesliga rivals Hoffenheim. And he even missed a penalty in a 4-0 win.

Italy, Switzerland, Algeria, Cameroon, Ghana, Ivory Coast, Chile and Uruguay could all have healing help on the pitch in Brazil this summer. Kit manufacturer Puma has unveiled its new jerseys for the World Cup, which can apparently deliver massages to players during the game.

The shirts contain a special tape that provides "micro-massages" for the wearer, according to Italian news website Il Sole 24 Ore. The massage strips "maximise muscle power" by allowing the body to recover from exertion more quickly, according to the manufacturer.

African champions Nigeria have adopted a code of conduct which is designed to make player bonus rows a things of the past.

Several attempts to introduce a code have been met with stiff resistance from players in the past. But the Nigeria Football Federation is desperate to avoid a repeat of the dispute that almost caused the Super Eagles to miss last year's Fifa Confederations Cup in Brazil.

The NFF's decision to reduce bonuses from £6,000 for a win and £3,000 for a draw to £3,000 and £1,500 respectively upset the players so much that they came within a whisker of boycotting the World Cup dress rehearsal.

But the country's Sports Ministry intervened and made extra money available, eventually allowing the squad to travel to Brazil - two days late and only about 36 hours before Nigeria's opening game against Tahiti.