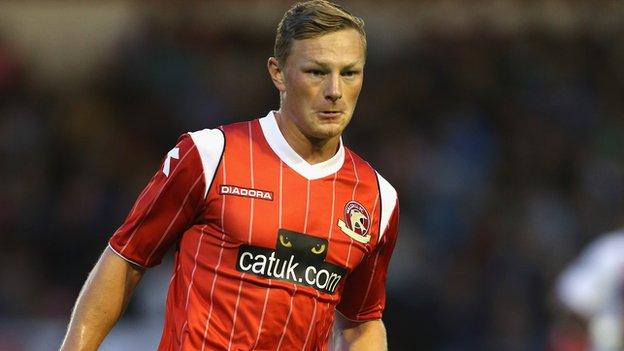 The 22-year-old midfielder's first sending-off as a professional footballer, for a high challenge on North End's Joe Garner, carries an automatic three-match suspension.

But Walsall have opted to query referee Sebastian Stockbridge's decision.

"I didn't think it was at the time and I still don't having seen it again," Saddlers boss Dean Smith told BBC WM.

"Strange decision. Good tackle. He got the ball first and played it on to the other lad's shin."

Team-mate James Baxendale, scorer of Walsall's first-half equaliser at Deepdale, added: "I was right next to it. It was a 50/50. Both lads went in fair and Sam's actually hooked the ball away.

"I'd be hopeful. Maybe the ref will take a look at it and see it was two honest lads going in for the challenge.

"The whole thing was just the sort of natural occurrence you get in football. I did not expect to see the red card."

Apart from never previously having been sent off, Mantom had only been booked three times in 89 games. And Walsall hope that his previous almost impeccable disciplinary record will count in his favour.

"We all know what type of player Sam is," added Smith. "He's not one of those you expect to get a red card."

Walsall have already been successful with one red card appeal this season when they had skipper Andy Butler's dismissal at Orient overturned.

If the decision is upheld, Mantom will miss Wednesday night's trip to Sixfields, against Coventry City, Saturday's local derby against Wolves and next Tuesday night's home date with Crewe Alexandra.