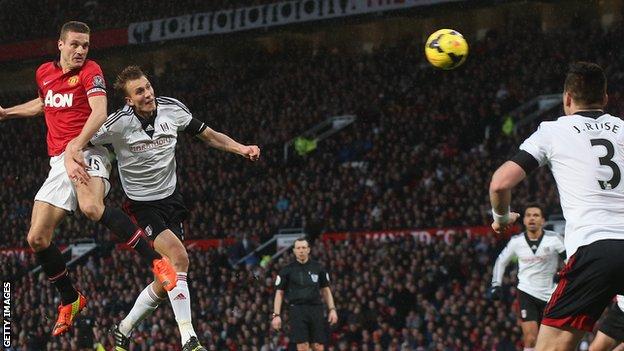 Manchester United captain Nemanja Vidic will join Inter Milan on a free transfer in the summer.

The Serie A giants have confirmed the 32-year-old centre-back has signed for them, although they have not reveal the length of contract.

Vidic has had such influence at United on the field. A captain and a leader, I cannot understand why it was announced halfway through a season that a player of such standing will leave in the summer. It is a bizarre way to manage the situation and could have been handled far better.

He joined the club in 2006, and has made over 200 appearances, helping them to five Premier League titles.

"Vidic is a world-class player," Inter president Erick Thohir told his club's website. "I'm extremely happy to have completed this deal to bring Nemanja to Milan.

"He's one of the world's best defenders and his qualities, international pedigree and charisma will be an asset to the team and help bring through our younger players.

"He will bring added value to the club and is another piece of the great Inter side we are building."

United manager David Moyes said the decision to let Vidic leave had been mutual, although it is understood the player was initially open to the idea of remaining at Old Trafford.

However, he explored other options when an extension to his present contract, which expires at the end of June, was not forthcoming.

Despite announcing his intention to quit, Vidic has remained as skipper, a position he has held since the start of the 2010-11 campaign.

A £7m signing from Spartak Moscow, Vidic formed an exceptional partnership with Rio Ferdinand, and was part of the United side that claimed a hat-trick of Premier League titles between 2007 and 2009, won the Champions League in 2008 and reached the final again 12 months later.

He was also ever-present during a record-breaking run of 14 consecutive clean sheets in the 2008-09 Premier League season.

His latter years at Old Trafford have been plagued by injury, including ruptured cruciate knee ligaments sustained against Basel in December 2011.

Nevertheless, either side of that setback, he collected two more championship medals, lifting the trophy for the final time in May.

Like United, Inter look certain to miss out on qualification for next season's Champions League. They are currently fifth in Serie A, 11 points behind third-place Napoli.