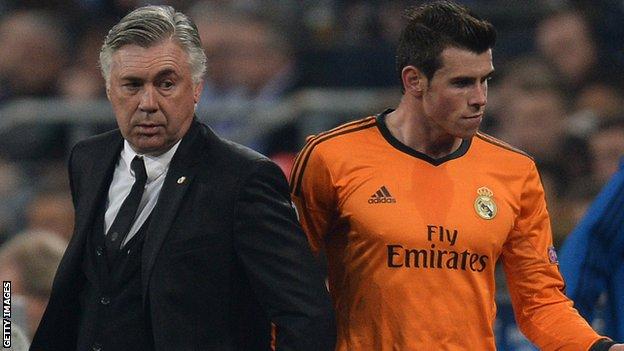 Real Madrid head coach Carlo Ancelotti was pleased to see his side cope with "violent" Atletico to secure a point that keeps them top of La Liga.

Cristiano Ronaldo's late strike rescued a 2-2 draw for Real in a fiercely-contested derby at the Vicente Calderon stadium on Sunday.

The result means Real are one point clear of title rivals Barcelona.

"They [Atletico] tried to impose a violent game. We tried to play and in the end we did it," said Ancelotti.

"We drew a game that we were losing.

"The response was good and overall we can be satisfied because Atletico are a good team, particularly at home.

"We're top and that's good. Now we have seven games at home and five away."

Karim Benzema opened the scoring for Real but strikes from Koke and Gabi gave Atletico a 2-1 lead at the break.

Tempers flared in the second half when Atletico assistant coach German Burgos had to be restrained on the touchline after striker Diego Costa had a penalty appeal turned down.

"I always say that the result is what it is. What matters to me is the way in which it comes about and the team showed that it [the title challenge] is still alive," said Atletico coach Diego Simeone.

"There are still 12 games left, which is a lot. For us to be just three points behind is a very good position to be in."