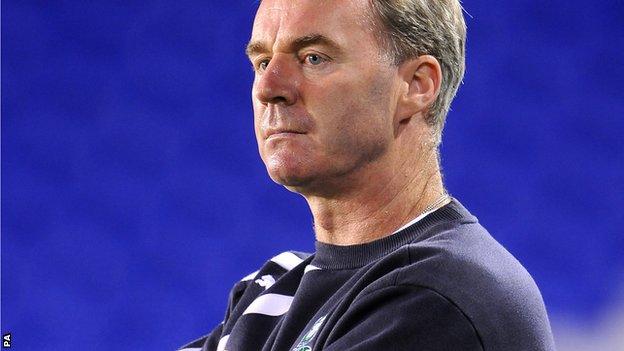 Plymouth boss John Sheridan says the consistency his in-form side are beginning to show will be the key to making the play-offs this season.

Argyle are two points off the play-off spots after Saturday's resounding 5-0 win over Morecambe, which followed a 4-0 thrashing of Fleetwood.

"We're showing a bit of consistency which is what you need to do in this league," he told BBC Radio Devon.

"I've done well with other teams and consistency is the magic word."

Sheridan's side have struggled for goals for much of the season. But since the 4-0 home defeat by York City on 15 February, Argyle have been transformed as an attacking unit with 11 goals scored and just one conceded in the space of three straight wins.

"I know teams don't go out to lose at certain points in the season but there is that theory that teams can hit form at the 'right' time.

"If you look at [sixth-placed] Southend, they dropped points again at the weekend and have only taken five from their last eight games.

"John Sheridan has got the balance of the side right. He's got a good formula which is really working for him at the moment. Let's see how far this can go."

"We're playing alright at the moment but I'll keep my feet firmly on the ground because I know what's round the corner in football," said Sheridan, who was under pressure earlier in the season after a run of eight games without a win.

"But I'm chuffed for the players. They've responded really well.

"I'll try to rotate my subs because they're all working very hard in training and they're a good group of lads."

Sheridan hailed the performance of striker Lewis Alessandra, who scored his 10th and 11th goals of the season in the demolition of Morecambe, his former club, as Argyle secured their first home win since 1 January.

"It's about the team and I don't like to pick out individuals but Lewis was top drawer again," he said.

"Lewis gave me a nine out of 10 and everyone else gave me at least a seven-and-a-half, so if you get that then you've got a chance of winning any game.

"Again it was a very, very good performance. To keep a clean sheet and score five goals is very pleasing.

"First and foremost it's good to get back to winning ways at home but I thought we were outstanding. They had a little chance just before we scored our goal but other than that we've totally dominated the game. I think our fitness levels, which meant we could play the game at the tempo we wanted, won us the game.

"I'd rather fans were happy! I think they're happy now and they're good supporters.

"I've been here a year and there's been some hard times during that. It's good to give them some hope but we've got to try to keep winning games - the next game is the most important."