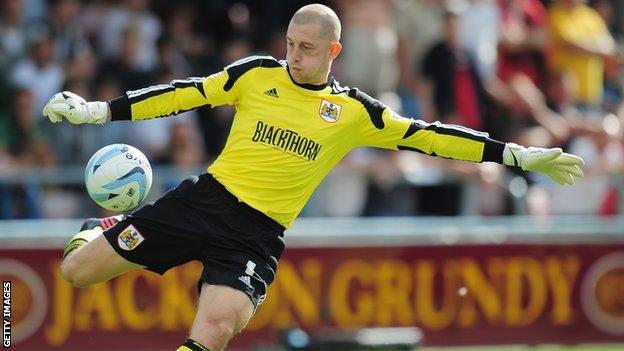 Fielding, 25, was signed in the summer by ex-boss Sean O'Driscoll, but lost his first-team place to Elliot Parish.

But with Parish out on loan at Newport, and City's loan keeper Simon Moore injured, Fielding was recalled for Saturday's 2-1 win over Gillingham.

And Cotterill told BBC Radio Bristol: "Since I've walked through the door, Frankie has been so supportive."

The City boss continued: "He came here at the beginning of the season to be number one and lost his place to the number two keeper, but supported him implicitly.

"I gave him a bigger kick in the teeth by getting another goalkeeper in (Moore). It will stay between me and him why I did that.

"But he's been a model professional since I've been here. He's been first-class."

Fielding arrived in June from Derby County for an undisclosed fee and signed a three-year deal.

He has made only 18 senior appearances in the last 12 months, but will now have the chance to prove himself while Moore is sidelined.

"I'm not naming next week's team, but unless anything happens to him, he's going to play next week," said Cotterill.

"He's earned it. I thought he had no chance with the goal [against Gillingham], but his handling was as good as the handling of himself in a professional circumstance."