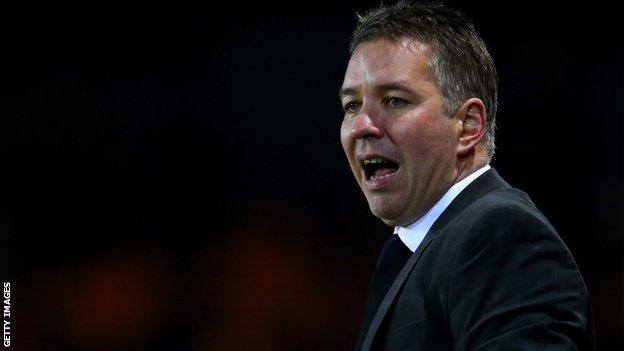 Peterborough United boss Darren Ferguson has accused referee Lee Collins of swearing at a player during Saturday's defeat by Crawley.

The Posh manager has spoken to referees' chief David Allison, but will not make a formal complaint.

"I don't think a referee should be telling one of my players to eff off," Ferguson told BBC Radio Cambridgeshire.

The body responsible for referees in England said it could only comment if an official complaint was made.

As Posh did not report the incident in the match report and have not lodged a formal concern since, neither Professional Game Match Officials Limited, the organisation that assigns referees to games across the Premier League and Football League, nor Collins will comment.

"I spoke to the boss of the referees for a good 15 minutes," Ferguson said on Monday.

"It was a good conversation and I've left it at that.

"There were one or two things I wasn't happy with and neither was he when I gave him the information."

Posh lost their League One fixture with Crawley 1-0 at the weekend, with the winner coming from a late penalty awarded by Collins.

Ferguson, commenting on the referee's alleged use of an expletive, said after the game: "It's unprofessional and has to be looked at. I was disappointed to hear it.

"[When I spoke to him] he said 'I can say what I want to players'. I don't know if that is the right answer.

"I mention it because I think I need to. I think it's disappointing when you get things like that.

"If one of my players had done it to him, he'd have been sent off.

"I don't want to make it about the referee because I'm not going to make excuses. It was a disappointing result. But I think I should bring it to people's attention."