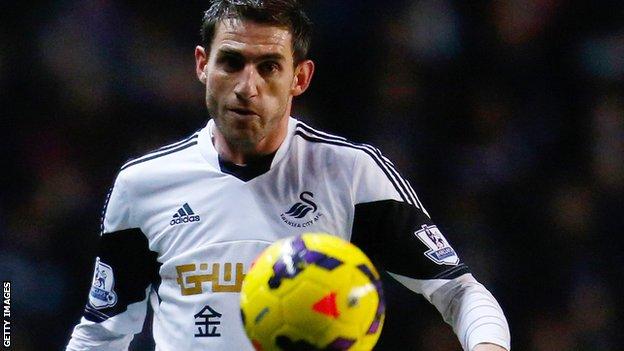 The Swans drew 1-1 at home to Crystal Palace on Saturday, their sixth game in 17 days - including two Europa League matches against Napoli.

"We are going to rest, refresh our minds, which is the most important thing," said the Spaniard.

"It's been a busy period in February with the Europa League, the [FA] Cup and the Premier League games, so it's a good moment to properly rest.

"We've played two, three games a week for the last two or three weeks, so obviously it's hard for us.

"The Europa League in the last couple of weeks has affected us, but we know now that... [we] will be fresh for the remaining 10 games and hopefully we'll get as many wins as possible."

The Premier League fixture with Arsenal had been scheduled for 8 March, but will now be played at 19:45 GMT on Tuesday, 25 March.

Swansea have only managed one win in their last seven games in all competitions, including bowing out to Italians Napoli in Europe.

But Rangel believes that without other distractions the Swans can improve their league form.

"It is going to help that you are only going to focus on one competition," he added.

"We've got so many games at home against the teams around us, which is the most important thing.

"The next one is West Brom so that's going to be a massive, massive one for us.

"Let us start from there and see what happens."