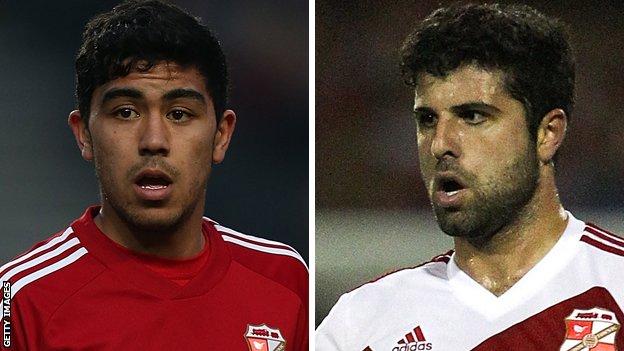 Swindon Town manager Mark Cooper says he has mixed feelings about international call-ups in his squad.

Yaser Kasim, 22, has been named in the Iraq squad for Wednesday's Asian Cup qualifier against China in Dubai.

And fellow midfielder Massimo Luongo, 21, is available for Australia in their friendly with Ecuador in London.

Speaking about Luongo's call-up, Cooper told BBC Wiltshire: "I'm not looking forward to him going because you don't know what's going to happen."

The Town boss continued: "You don't know if he's going to come back in the state that he goes. But it's brilliant for him to go and play.

"Yaser will play on Wednesday and fly back on Friday.

"It's just football and we'll deal with it.

"Fair play to them. It shows how well they've played to get the recognition."

It is the first time Sydney-born Luongo has received a call up from the Socceroos.

Kasim, who was born in Baghdad and moved to London aged seven, was invited to join the Iraq squad earlier in the season, but turned it down in order to play a Friday night game for Swindon.

Both players came through the Tottenham youth team and signed permanent deals with Town in the summer.

They are now regulars in the Swindon first-team - Luongo having played 42 games so far for the club and Kasim making 38 appearances.

Meanwhile, Cooper says he expects young midfielder Louis Thompson to be called up for Wales Under-21 in the near future.

The 19-year-old has impressed in 27 appearances for Swindon this term but missed out on selection to Geraint Williams' latest squad.

"If I was the manager, I'd certainly be calling Louis up as he and his brother [Nathan] are fantastic," added Cooper.

"When you play with that much pride, passion and desire then you are going to play regularly."