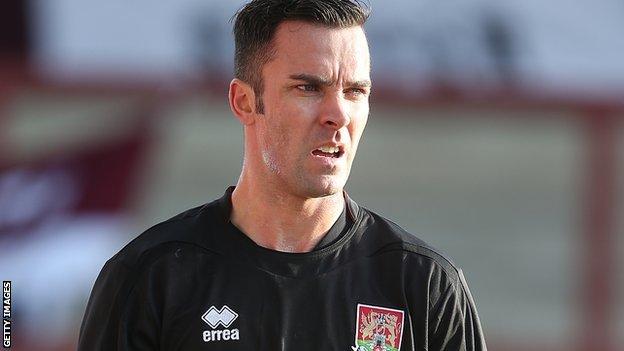 Northampton Town's Leon McSweeney says some teams mid-table in League Two may find it hard to stop a slide.

Although the Cobblers are four points adrift in 23rd, only six points separate the 13 teams above them.

"We knew we were in a dogfight from January, and the club did something about it," McSweeney said.

"It's very difficult for teams who are so-called safe, until ten games to go, and then realise after a few losses they're going to get sucked in."

Before their recent successes, Northampton hadn't won back-to-back games since the end of last season.

They've been in the bottom two since September and it shows the trouble they were in - and the improving form of the teams around them - that three wins and one draw has only narrowed the gap to four points.

Newport, who are 11th, have just one victory in ten, 15th-placed Morecambe have not won in ten matches and Exeter in 18th have one win from 11 games.

Northampton, meanwhile, are unbeaten in three league matches, having beaten Hartlepool and Southend and drawn with Bristol Rovers.

Speaking to BBC Radio Northampton, McSweeney, who joined the club in January and has helped the defence to two clean sheets in their last three matches, continued: "The last week mentally has been very draining.

"We've got back-to-back wins and today [against Rovers] was maybe one game too far with regards to creativity. We didn't get that luck in front of goal.

"We're confident that we've got a good group, a good manager and a good assistant that are putting us on the right track, and we're backing it up with performances.

"There's enough games there for us to look after ourselves."