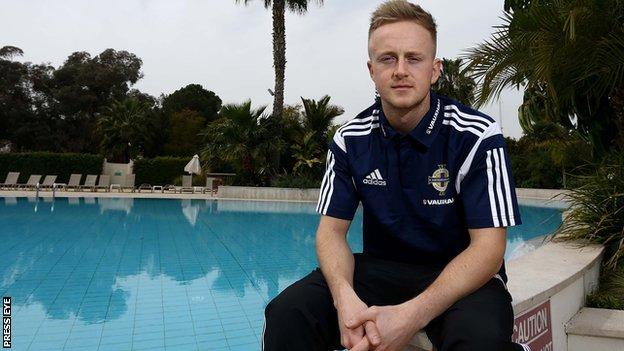 Ben Reeves is desperate to make the most of his "incredible opportunity" with Northern Ireland in Wednesday's friendly against Cyprus.

The MK Dons midfielder received his first call-up to the squad for the friendly in Nicosia.

"I was ecstatic when I got the call, so was my family and everyone at home too," said the 22-year-old.

"It would be unbelievable to play international football - it would be an honour to represent Northern Ireland."

Reeves, who qualifies for Northern Ireland via his maternal grandmother, started his career at Southampton's renowned academy.

He was a year above England and Arsenal star Alex Oxlade-Chamberlain, but dropped down to League One when he was released by the Saints.

Reeves has taken well to the task, scoring 10 times this season from midfield and catching the eye of Northern Ireland boss Michael O'Neill in the process.

"My nan is from Fermanagh and a lot of my Mum's side still live over there, so I always knew it was a chance for me to play for Northern Ireland," he added.

Ironically, Reeves' new international captain, Steven Davis, is one of the men who forced him out of St Mary's when he was signed to bolster the club's Premier League credentials in 2012.

Reeves holds no grudges on that front, though, and is hoping his week away with the likes of Davis and Chris Brunt can help him become a better player.

"I trained with 'Davo' a lot at Southampton and it's good to know someone when you're coming into a squad and meeting a lot of new people," he said.

"He's an easy guy to get on with, everyone likes Steven. You can always improve and training with these players can only help.

"Working with guys from different styles and different cultures is good, especially when they're international players.

"You need to learn from them and then take it back with you and improve."