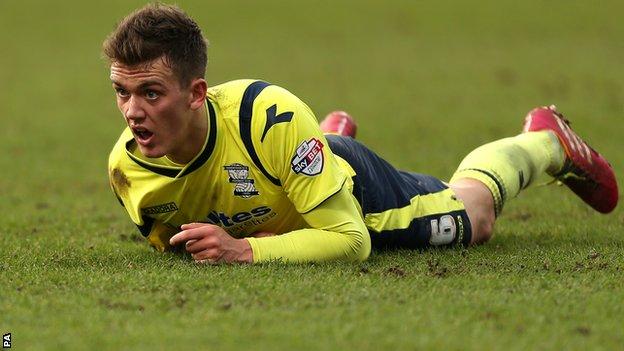 Manchester City midfielder Emyr Huws hopes to make his debut for Wales against Iceland on Wednesday.

Huws, has impressed during his loan spell at Championship side Birmingham, winning the club's player of the month award for February.

The 20-year-old has represented his country at under-21 level and with Arsenal's Aaron Ramsey out injured he could feature in the Welsh midfield.

"Hopefully I can get on and get my first cap," said Huws.

"That would be a great achievement for me."

Wales are using the friendly at the Cardiff City Stadium as part of their preparation for their Euro 2016 qualifying campaign.

Chris Coleman's side start their bid to reach the tournament in France away to Andorra in September.

Huws hopes to be a part of the Welsh squad for that but for now is focusing on trying to get the nod to play against Iceland.

"I was chuffed to get the call," said Huws.

"It's good to be with the lads and around the squad, so I'm delighted."

Making the grade at City will be tough for the Welshman.

Manager Manuel Pellegrini has a wealth of funds and talent and experience at his disposal in Huws' position, including the likes of Fernandinho and Yaya Toure.

"It probably is a bit tougher at City than other teams," said Huws, "but that's the environment you're in.

"You have to deal with it and try and improve and stake your claim in the team.

Huws has played every minute of the six games he has started for Birmingham since his February loan move from Manchester City.

"But it's good to be around those players and it's a good thing I think."

The Welshman's only appearance for the Capital One Cup winners this season was as a sub in their FA Cup fourth round win against Blackburn in January.

Since joining Birmingham on loan in February, he's started all six games and says the move has been beneficial.

"I've enjoyed my time at Birmingham and it's been good for me so far," said Huws.

"I think the main thing is just to play as much as I can and gain experience and just keep improving and gradually progressing."