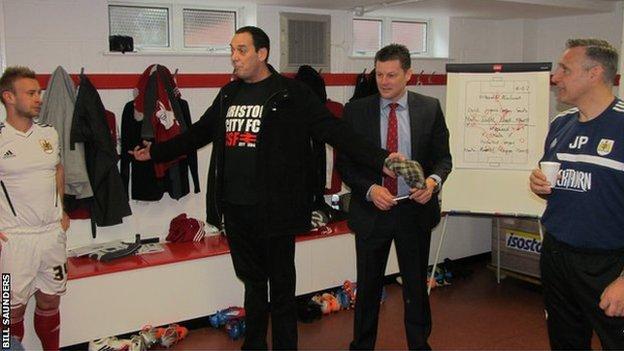 Lifelong fan Saunders, 54, suffers from lung cancer and was invited to speak to the team before what could be his final visit to Ashton Gate.

"He spoke to them for over five minutes - you could hear a pin drop," Mark's brother Bill told BBC Sport.

"Mark spoke to them about the fact he'd been a follower for 30 years and how they fought together as fans.

"But he said the players hadn't been fighting together this season and hadn't been playing as a team.

"He also said it was his dying wish to see them win three points.

"At the end, the players all stood up and clapped. He was delighted - it was a wonderful day." 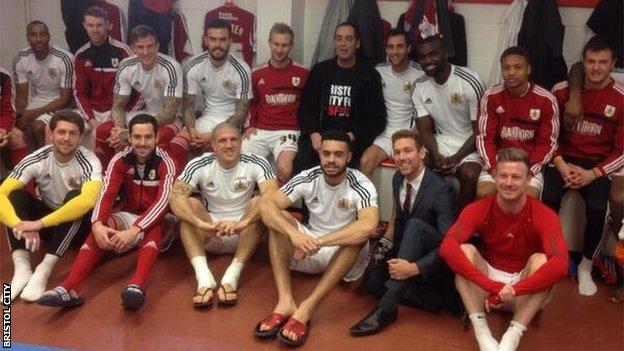 Saturday's win lifted Bristol City out of the League One relegation zone on goal difference and manager Steve Cotterill dedicated the victory to Mark, who lives in Bedminster and was diagnosed with the disease last April.

"We were quite choked in the dressing room," Cotterill told the club website.

"He wanted to have a little chat with the players as he didn't feel as though he was going to see next Friday out, which puts football into a bit of perspective.

"He gave a little speech to the lads and it was more or less his dying wish that he wanted three points today, so what we want to do is dedicate that win today to Mark and his family.

"It was tough to listen to him, it's quite emotional just thinking about it, but hopefully we've given him a good weekend."

A City fan for over 30 years, Mark previously worked in the building trade and has three children with wife Wendy. Last week he became a grandfather for the second time.