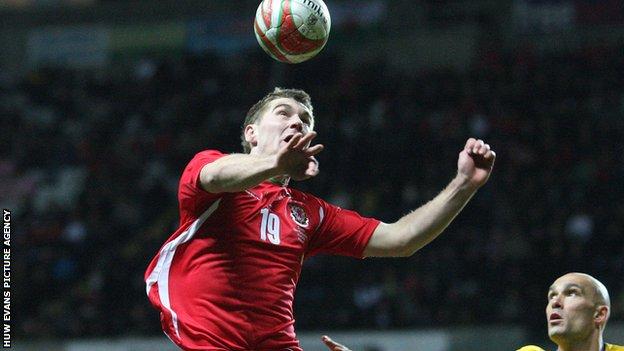 Sam Vokes is hoping his good club form this season will provide the step to become a starting regular for Wales.

He has enjoyed an impressive season, scoring 18 goals to help Burnley climb to second in the Championship.

Vokes, 24, now hopes to start Wednesday's friendly with Iceland in Cardiff and prove his worth for Wales.

"It's a big aim for me. This season establishing myself at club level was a big thing to give me the basis here... hopefully I'll get the nod," he said.

Vokes has fond memories of playing against Iceland, having made his debut in a 1-0 win in Reykjavik in May 2008.

The Bournemouth product has scored five goals in 30 games for Wales since his international bow, but most of his appearances have come off the bench.

Iceland finished second in World Cup qualifying group E behind Switzerland, but lost in the play-offs to Croatia - who were runners-up in Wales' group.

Wales finished a disappointing fifth in Group A, but Chris Coleman's side are confident they will be a different proposition in qualifying for Euro 2016.

They face Bosnia-Hercegovina, Belgium, Israel, Cyprus and Andorra in their Group B qualifiers.

"It's a good group for us... we can give ourselves a chance to qualify," Vokes said.

"I think it's shown this week the lads have all come away and got together, and it's a good friendly on Wednesday to start building towards that.

"They'll be a strong test for us on Wednesday, they got into the play-offs and did very well in their group.

"We've got a good group of lads here that are playing good football at a high level, so that can only help us.

"It's great to meet up, it's been a while I think, just before Christmas was when we met up last."

While establishing himself as Wales' target man in attack is Voke's ambition, he is also focused on continuing his rich vein of scoring form and helping Burnley reach the Premier League.

"It's been a good season so far for us, we've given ourselves a good lead in second [five points over third-placed Derby] in the last couple of games and it gives us a chance to kick on towards the end of the season," Vokes added.

"It would be massive [to win promotion to the Premier League] but there's a long way to go yet.

"I'm enjoying my football at the moment and enjoying playing at Burnley, it's been a great season personally... everything has just clicked."

Wales start their Euro 2016 qualifiers away to Andorra on Tuesday, 9 September, then face top seeds Bosnia-Hercegovina at home on Friday, 10 October before welcoming Cyprus on the following Monday.

Chris Coleman's men face Belgium away on 16 November, with the return fixture on 12 June, 2015.

Wales complete their campaign at home to Andorra on 13 October, 2015.

The Euro 2016 finals are being hosted by France, who qualify automatically, and will be made up of 24 nations, an increase from 16 in the current format.