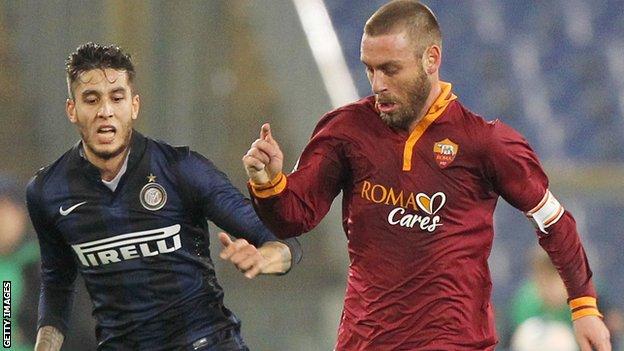 Roma and Italy midfielder Daniele De Rossi has been banned for three Serie A matches after punching an opponent during Saturday's goalless draw with Inter Milan.

De Rossi clashed with Inter's Mauro Icardi when battling for the ball.

The referee missed the incident, but the league has made the decision to ban the 30-year-old based on TV replays.

De Rossi was left out of the Italy squad for this Wednesday's friendly with Spain.

Italy coach Cesare Prandelli has dropped players in the past, including De Rossi, for bad behaviour in club matches.

AC Milan striker Mario Balotelli was omitted from the squad because of a shoulder injury, while Parma defender Gabriel Paletta and Torino forward Ciro Immobile were called up for the first time.