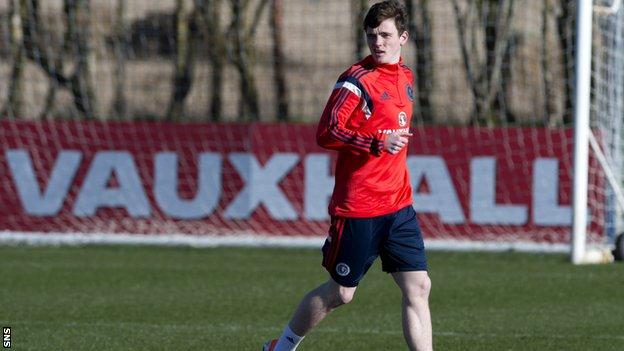 Andrew Robertson is excited by the prospect of making his Scotland debut little over a year after featuring for amateurs Queen's Park.

The 19-year-old released by Celtic as a youth is in Gordon Strachan's squad eight months after joining Dundee United from The Spiders.

"It's been a quick progression, but I always knew I could do it. It was just getting given that chance," he said.

"Luckily, the gaffer at United gave me that chance, I think I've repaid him."

Robertson has impressed for Jackie McNamara's side this season, with the left-back also proving a goalscoring threat against Premiership defences.

"My performances for United I believe have been good enough," said the defender.

"When I was younger, I was watching these players playing and breaking through, so it's good to be meeting up with them and obviously they are experienced players, you can learn a lot from them.

Nobody could have imagined how quick I've progressed, but I wouldn't want it to be any other way

"I'm just enjoying being called up and enjoying the experience.

"In my older years, I hope to be pushing for a start and trying to make it my own position, but now I'm just glad to be involved with the first team and learning every day."

This time last year, Robertson was playing for Queen's Park when they lost at Hampden 2-1 to Montrose. Asked if he would have believed then that he would be in the Scotland squad 12 months later, he said: "I would have probably just laughed at them to be honest. I actually remember that game well. We played terrible.

"Nobody could have imagined how quick I've progressed, but I wouldn't want it to be any other way."

"I saw what Gordon saw when he came to training," said McGhee. "We were hugely impressed with the lad's ability and enthusiasm and confidence for such a young lad who had come so recently from where he's come from.

"We've monitored him, we have kept in touch with the people around him and he's been playing consistently well all season; we don't have any fears that, if he is involved in some way, he won't do well for us.

"We're excited by him, we're delighted for him, he's a young lad and I think it shows that Gordon is prepared to play and include them young if they are good enough.

"It is a great message to the others and there is an exciting opportunity come the autumn."