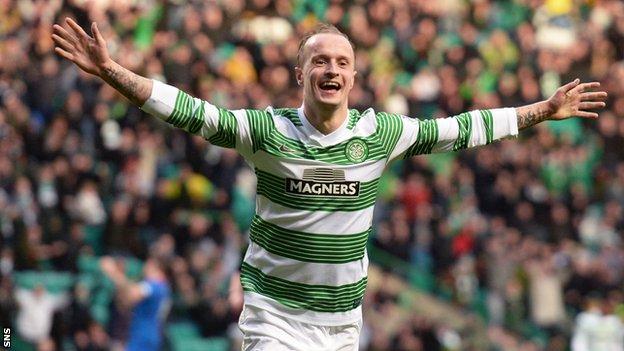 Striker Leigh Griffiths is in the frame for Scotland's Euro 2016 qualifiers having "hit the ground running" at Celtic, according to Mark McGhee.

And, ahead of Wednesday's friendly in Poland, McGhee praised the in-form marksman.

"It's fantastic he went to Celtic and that can benefit the national team," said McGhee. 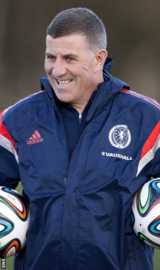 It's not about who is playing well now, it's going to be about August and September and how they are looking then

With Scotland's Euro 2016 qualifying campaign getting under way in Germany on 7 September, strikers will be keen to catch manager Gordon Strachan's eye.

Griffiths, 23, was a January deadline day signing from Wolves and opened his Celtic account with a goal in the 2-0 win at Hearts last weekend.

He followed that up with a hat-trick in the 5-0 thumping of Inverness CT on Saturday.

"There's a fairly limited number of players we think are going to be good enough to qualify us and Leigh Griffiths is one of them," said McGhee.

"And we think that, with Leigh Griffiths being at Celtic now and the new experience he'll have next season of the Champions League, that can only make him a better player and only make him more prepared and more effective for the national team.

"So that is fantastic that he's went to Celtic and I think we'll benefit from that.

"He's got a great chance at Celtic because they do provide him with chances, but I think that he's obviously risen to it.

"He's gone there and it's been so positive for him and he's hit the ground running and it's fantastic when you start getting hat-tricks right away."

McGhee said it was good to have more than one striker vying for roles in the starting line-up once the qualifying campaign begins.

"Maybe (Craig) Mackail-Smith might be fit by then, and we have got Ross McCormack, Steven Fletcher, Leigh and Jordan Rhodes," added McGhee.

"It's not about who is playing well now, it's going to be about August and September and how they are looking then."

Does being drawn in the same qualifying group as Poland alter Scotland's thinking for Wednesday's friendly in Warsaw?

"It is no less important to us," said McGhee. "We know already that we will never get enough games to satisfy the manager in terms being able to prepare his ream for competitions.

"I think the game in October is far enough away that so much can change in that length of time, over a summer, that we will try to discount the fact that we are in the same group.

"In the back of the players' minds, in the back of our own minds, will be that thing that we are going to be playing them, but I don't think it's too big a factor.

"I think we'll get a feel for the environment, we'll see their players up close. Fletch might be the only one who has played against (Robert) Lewandowski, who's their best player, no doubt about it.

"It is away from home, so it is slightly more advantageous for us than it is for them. We've got more to gain from it.

"It won't be a free-for-all with substitutions just because we've drawn them in the section.

"I think we'll respect the fixture the same and we'll want a performance out of the team the same as we would any other game.

"If we go there and get a positive result, it still won't have any bearing on when we play them over there in October.

"Equally, if we were to there and get a negative result, I think we wouldn't think that was what was going to happen in October.

"For us, the most important thing is the consistency of performance."