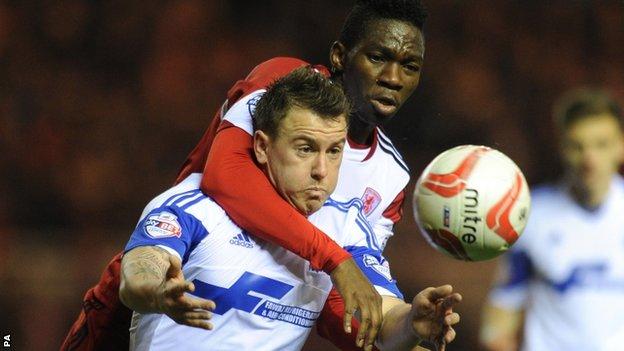 Billy Davies's men had picked up just one point from their previous four games and looked set to suffer a fourth successive defeat when Mustapha Carayol put Middlesbrough ahead just after the break.

Henderson hit back for Forest, finishing off at the second attempt after Andy Reid had provided the cross.

Forest remain in the play-off spots.

The goal also ended Middlesbrough's run of 11 hours and 54 minutes without conceding a goal at the Riverside Stadium.

They will be kicking themselves, though, as Carayol wasted a decent chance to double their lead after being sent through by Grant Leadbitter.

Henderson equalised, but Middlesbrough claimed the striker had handled the ball, before putting it into the net.

However, the hosts nearly scored a winner as Kei Kamara's flick eventually found its way to Danny Graham - but from just six yards, the striker's effort cannoned back off a post.

"I think it was handball, for sure. You could see from the reaction of my players that they thought it was.

"These are not players who would normally chase the referee to complain and if they thought it was handball, then 100% I believe them.

"We haven't played well but we had two or three good chances to win this game against a very good side who are in the play-off places."

"We are disappointed a bit. We could've come in at half-time a few goals up and I thought we showed great spirit to come back into it after going behind.

"Given the way we played over the 90 minutes, I thought a point was the least we deserved."