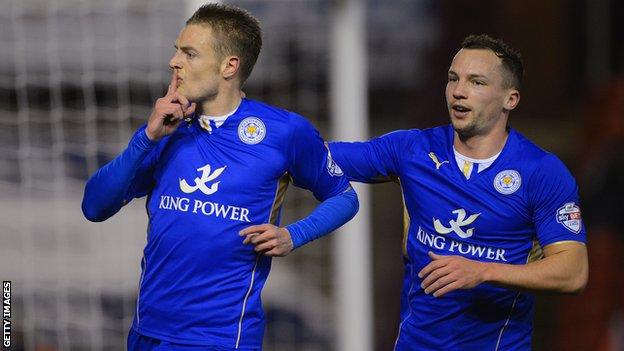 Leicester City moved eight points clear at the top of the Championship with a comfortable victory at Barnsley.

Anthony Knockaert hit the bar for the visitors, before Jamie Vardy scored his first of the night when he finished after David Nugent's header.

The excellent Vardy set up Leicester's second as his pass found an unmarked Danny Drinkwater, who side-footed home.

Leicester have now scored 65 times in 34 Championship matches, the highest tally in the division.

The win means Leicester are now on 77 points, eight ahead of second-placed Burnley, who play at Birmingham City on Wednesday.

Nigel Pearson's team are also 15 points clear of Derby in third as the Foxes aim to return to the Premier League, after last playing in the top-flight in the 2003-04 season.

Barnsley were comprehensively beaten and remain 23rd in the table, two points adrift of safety.

Leicester, now unbeaten in 15 Championship games, could have taken an early lead but Knockaert hit the woodwork. Mahrez's effort was then well saved by Steele, before Vardy scored for the fourth successive match.

But Barnsley almost grabbed an unmerited equaliser when Chris O'Grady put a free header wide, in one of their rare chances.

That miss proved costly as Drinkwater doubled his side's lead in the 58th minute, before Vardy made it 3-0 with his 15th goal of the season four minutes later.

Only a point-blank save from Steele late on to block Gary Taylor-Fletcher's header denied Leicester a fourth.

"We've worked hard to get to the top of the league and we want to try and do everything we can to stay there.

"We're not virtually there, we want to try and win every game that we play.

"We won't do it, of course, but that's what we've tried to do every time we've played and we'll try and have that same approach to games from here on in.

"I don't know what the total will be that's required to get automatic promotion, or to win the title, but we'll do everything we can to accrue as many points as we can and we'll see where it takes us."

"Leicester are the best team in this division by a country mile, in my opinion.

"They're class, they're a good team to watch and I'm slightly jealous in one respect because they've got some quality players there.

"It's coming together for them now. They're a Premier League team in waiting; it's only a matter of time."

Shots on Target
Home0
Away10