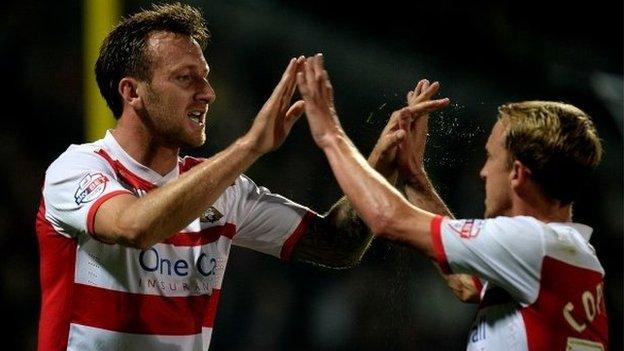 Watford striker Mathias Ranegie was sent off early on for kicking out at James Husband.

Chris Brown headed Rovers in front and, despite being pegged back by Ikechi Anya's equaliser from Fernando Forestieri's ball, Sharp's late strike secured all three points.

Watford are now 10 points off the play-off places.

Alexander Merkel forced a good save out of Doncaster keeper Sam Johnstone in the 16th minute, just two minutes before the dismissal of Ranegie, who appeared to retaliate to a pat on the head from Husband after the pair tangled down the left flank.

Rovers quickly capitalised on the man advantage when James Coppinger's cross was headed in by Brown at the near post.

Troy Deeney latched onto a sloppy backpass from Abdoulaye Meite shortly before half-time but, having rounded Johnstone, he appeared to be bundled over with the goal gaping.

Merkel struck a 20-yard free-kick against the crossbar early in the second half with Deeney diverting the rebound over the crossbar.

And Watford's pressure finally told in the 68th minute when Anya got on the end of Forestieri's scooped pass and slammed the ball into the bottom left-hand corner.

Rovers fought back well though and had numerous opportunities against their tiring opposition before Sharp stabbed home the decider.

"It was a tough game for us - Watford are a good side and they deserve a lot of credit. They worked their socks off and made it hard for us, although we looked nervy until they scored and I thought we switched off.

"But after they equalised, we got back to doing the right things and to be honest, we should have scored three or four more.

"It was a big win for us, a massive three points, but it is important not to get too carried away with it."

"I am disappointed about the red card as you always have to accept the physical contact on the pitch - I did not like Mathias's reaction.

"I was proud of them, but we are still heading back to Watford with no points.

"We played 10 against 11 for 70 minutes and it was harsh on us not to take anything from the game."