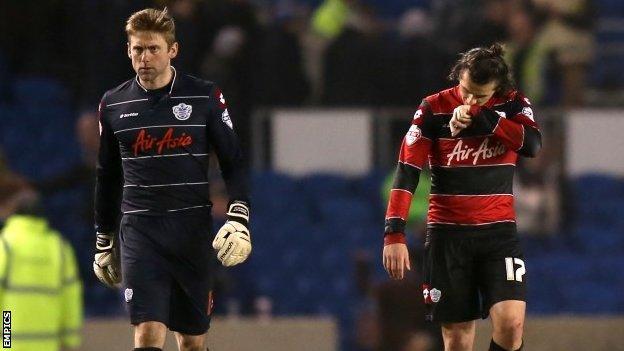 Ravel Morrison went close to scoring for the visitors when his drive was tipped over by Tomasz Kuszczak.

Bruno Saltor crossed for Ulloa to tap into an empty net for his sixth goal in eight games with 13 minutes left.

Ward got Brighton's second when he turned in from Kazenga LuaLua's corner.

Redknapp's side have now lost four of their last six matches and are nine points behind second-placed Burnley, while Brighton remain two points off the play-offs.

Ward scored his second goal of the season from LuaLua's corner to seal the win for Oscar Garcia's team.

"I am extremely proud of my players and their performance against Premier League-quality opposition.

"But I don't think it was our best performance. They have a fantastic manager and fantastic players but we have played better than this and lost.

"We knew we would find more space in the second half. And after the first goal we kept going and we didn't sit back."

"It was very frustrating. I thought we were just waiting for a goal to come.

"We had all the play, all the chances. We were strong at the back, good in midfield, making chances, but we just couldn't score.

"I thought it would be a hard game but it wasn't, even though we lost. We were excellent for 80 minutes and we got done against the run of play.

"Our keeper had not had a shot to save, then suddenly we were one down. But that's football. It happens."