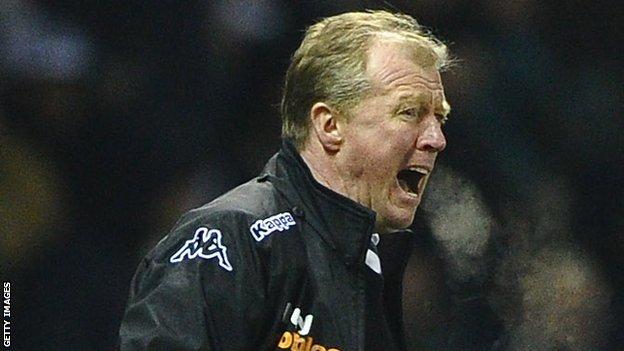 Promotion-chasing Derby County dropped two points at home to Bolton as they failed to score for the third consecutive Championship match.

Steve McClaren's Rams are in third place, seven points behind Burnley, who are in the second automatic promotion spot.

Bolton are now 11 points clear of the relegation zone.

Dougie Freedman's Bolton had won their previous three matches having been threatened by the drop for a lot of the campaign.

In a game of few clear chances, Derby were the more creative side but could not break down a well-organised Bolton defence.

Derby's Chris Martin had a low shot from the edge of the area saved by Bogdan before Andre Moritz's shot was saved for the visitors.

Neil Danns's volley brought a diving save from Rams keeper Lee Grant after the break before Sammon shot straight at Bogdan in injury time.

"It was a great performance, we dominated from start to finish and there was great determination from the players against a Bolton side that had scored 11 goals in their last three games.

"We played great football and switched the play, got crosses in and played very well. I couldn't fault it. I was just sat there waiting for the goal to go in, but at the moment it's not going for us.

"A few weeks ago we were winning games in the last minute but it will turn, we have players who can score and I'm pleased with the attitude of the players. We deserved to win the game."

"It's a very good point for us because Derby are fighting for promotion.

"We showed a resilience in our defending and I'm very proud of that point because it was one we would not have got earlier in the season.

"It was a fantastic display by Derby and they are probably disappointed they didn't win, but you can't fault our effort or commitment."