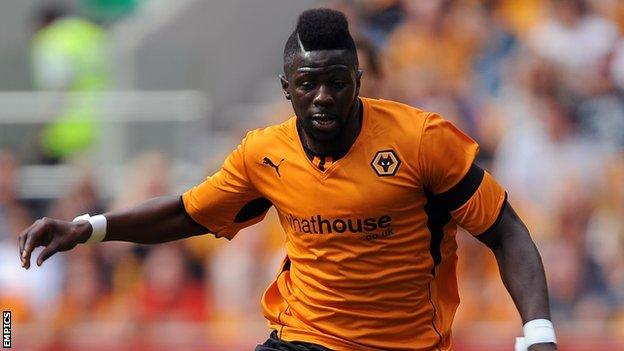 Promotion-chasing Wolves beat Swindon to set a new club record of nine successive wins and maintain their lead at the top of League One.

Bakary Sako headed in James Henry's ninth-minute cross from close range as Wolves ran riot in the first half.

Nouha Dicko drilled in Sako's pass for his eighth goal in as many games before Sako grabbed his second from 15 yards.

Wolves keeping strikers at the door

Michael Smith's goal for Swindon was the first Wolves had conceded in 680 minutes since Sam Baldock scored from the penalty spot in Bristol City's 3-1 defeat at Molineux in January. In that time Wolves were on target 21 times without reply.

Kenny Jackett's side have now scored 24 goals in their record-breaking run and remain two points clear of Leyton Orient at the top of the table, following Orient's win at Port Vale.

"You can't play against a club like Wolves, with the financial riches they've got, and not have 11 men pulling in the same direction.

"After rolling their sleeves up, I thought they were outstanding in the second half.

"I understand it's easier when you're 3-0 down but we could have easily been blown away.

"Full credit to the boys on the pitch in the second half - I thought they were outstanding."

"It was a game of two halves. I thought we were very poor in the second half and rode our luck.

"I was disappointed in the second half. We're capable of doing better and we'll have to do more than that.

"The most important thing is that we've won and it's a fantastic achievement by the players to get the club record."