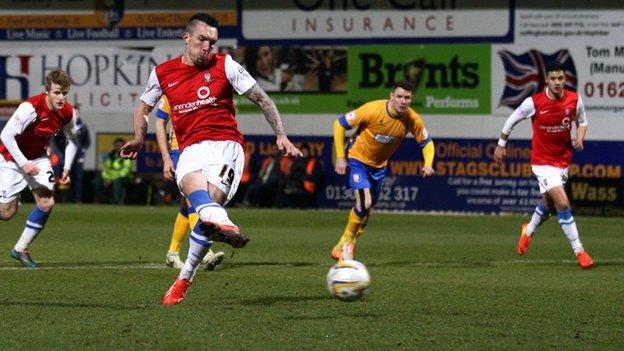 Referee Darren Drysdale, who was booed off at full-time, pointed to the spot after John Dempster felled Josh Carson.

The Stags protested as Bowman coolly slotted home, and the hosts were further incensed when they had two penalty shouts of their own ignored.

After having the first penalty go against them, Mansfield's Dempster went down holding his head, with team-mates claiming Bowman had elbowed him - but nothing was given.

The hosts thought they should have had a penalty when Keith Lowe's outstretched arm seemed to stop McGuire's high ball into the box, and again they appealed when Matt Rhead looked as though he had his shirt pulled at a free-kick.

"I think frustration is an understatement. I don't usually mention referees but I think he needs a mention tonight.

"When managers and players come off they analyse their performance and it would be interesting to know the referee's thoughts on his own performance tonight.

"To say some of the decisions were bemusing is an understatement.

"I feel the lads have worked really hard. The least we should have come out with was a draw. The referee should probably look at himself and the DVD and probably put his hand up and say he's had another bad day at the office."

"To be fair, we came though it in fantastic style and we stood up to the challenge.

"You know what's coming when you play Mansfield, it's coming in the box no matter where it is and that's their style.

"You've got to stand up to it and we, as a group of players, did that in magnificent style.

"We've got a huge three points."