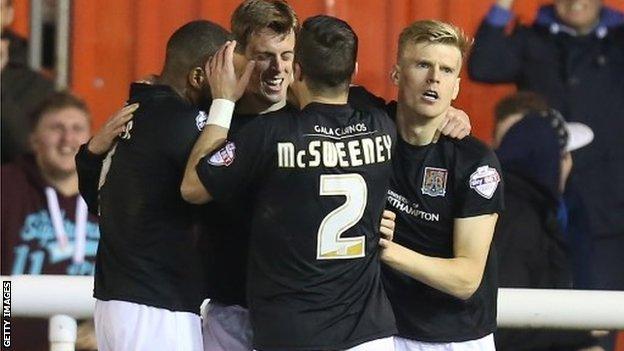 Northampton dragged Exeter deep into relegation trouble as Ian Morris' goal moved the Cobblers to within three points of their fellow strugglers.

A tense opening half finished goalless with David Wheeler wasting a glorious chance for the Grecians.

But Morris secured the breakthrough for the in-form visitors as he got on the end of Chris Hackett's pass.

Exeter failed to get a shot on target after the break as their long-suffering fans saw yet another home loss.

Wheeler's almost inexplicable miss in the first half could come back to haunt Exeter, whose last home win came against Plymouth Argyle on 5 October, while Tom Nichols, Matt Oakley and Liam Sercombe also had efforts on goal.

Emile Sinclair missed his team's best chance before the break, but the Cobblers were much improved after the restart with Hackett breaking down the right before crossing for Morris to volley into the ground and over keeper Artur Krysiak.

The Grecians have now lost four of their last five games to plummet down the table, while Northampton are building up momentum as they picked up their 11th point from the last 15 available to them.

"I've got a headache and lost my voice because of how hard Alan Knill and myself had to work the players in the first-half, and during half-time.

"We weren't at the races. It was perhaps the kind of performance that got us into this league position.

"But we kicked on and got a great reaction from the players and I can't deny it's not a big three points for us.

"Whatever happens with the teams above us, we have to show the kind of performance we did in the second half and if we do that, as I've always said, we'll be OK."