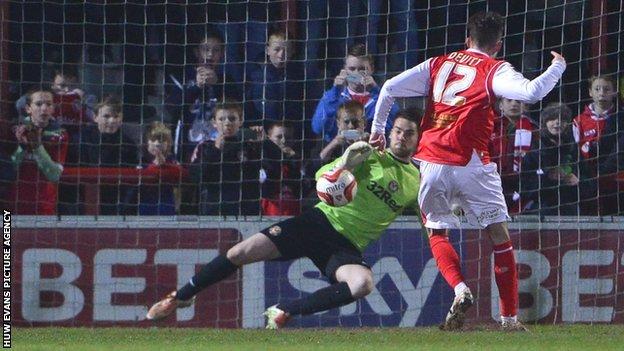 Newport led 1-0 at half time after Tom Naylor bundled in a 13th-minute corner.

But the defender was sent off after fouling Kevin Ellison in the area early into the second half, with Jamie Devitt levelling from the penalty spot.

Within five minutes Ellison added a second after rounding the keeper, before Redshaw headed in a corner and then finished off a rapid break.

It was Naylor's second disastrous game against Morecambe this season.

In the first meeting between the teams in September, Naylor scored two own-goals and conceded a penalty in a 3-2 defeat.

The result lifts Morecambe into 11th place while Newport drop to 13th after registering just one win in their last 13 games.

"From where I was standing I didn't think it was a penalty. I've spoken to the referee I think he was conned, but we're disappointed that we allowed their lad to get in there in the first place.

"But you know after that I think was had a six or seven minutes of madness where we lost our concentration and from being in control of the game we were out of it.

"We were looking solid up to that point, but the penalty has changed it."