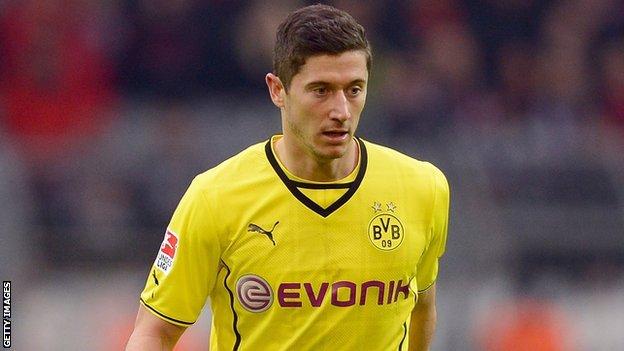 Lewandowski says he is looking forward to assessing the team's progress under new coach Adam Nawalka from the stand.

Nawalka sees the game as important in the build up to the Euro 2016 campaign, when his side again face the Scots.

But he insists that the meetings in qualifying Group D, which begins in September, will have no bearing on this week's match.

The match in Warsaw was organised before last month's Euro 2016 qualifying draw and has now become a dress rehearsal for matches between countries who came out the hat together.

"It doesn't matter that Scotland are our rivals in our qualification group because the decision was made months ago," said the coach.

"They have a good level of skills and they will show a lot of fight on the pitch.

"It's an important game in preparation for the European Championship. I hope our organisation is at a higher level than previous matches against Slovakia and Ireland."

Other than announcing the injury to Lewankowski and the captaincy for Piszcek, Nawalka was giving nothing away about his team selection.

What it does mean is that only one of Poland's renowned Dortmund trio will feature against the Scots as midfielder Jakub Blaszczykowski is also absent through injury.

It leaves Poland without a striker with more than seven caps in the absence of Wisla Krakow's Pawel Brozek and Hannover 96's Artur Sobiech.

Nawalka added Lech Poznan striker Luke Teodorczyk, a 22-year-old who has scored three times in five international appearances, to his squad at the weekend in anticipation of Lewandowski failing to prove his fitness.

Pogon Szczecin striker Marcin Robak will hope that his recent five-goal haul against Lech Poznan will enhance his chances of a seventh cap at the age of 31.

The other striker in the squad is Arkadiusz Milik, a 20-year-old who is on loan to Augsburg from Bundesliga rivals Bayer Leverkusen.

In contrast, Nawalka has three players from England's top flight vying for the number one jersey.

Nawalka, who praised the technique of Scottish football and is expecting a hard game in Warsaw, replaced the sacked Waldemar Fornalik after Poland's failure to reach this summer's World Cup finals - they finished fourth in England's group.

Only seven players from the Ekstraklasa - the Polish top flight - were selected for the original squad by the 56-year-old former Poland and Wisla Krakow midfielder.

Nawalka has not chosen any players from his former club Gornik Zabrze, who were leading the Polish league when he was appointed in October.