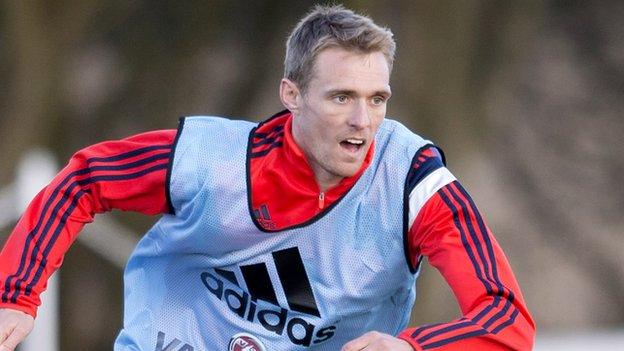 Barry Bannan has described Darren Fletcher as "the daddy of the team" and welcomed the Manchester United man's return to the Scotland squad.

The two are rivals for a place in manager Gordon Strachan's midfield.

And Bannan says the players are aware that starting places are up for grabs ahead of the Euro 2016 qualifiers.

But he stressed: "Darren's like the daddy of the team. You look up to him because of what he has done and just to have him back is a big, big boost."

Fletcher has returned to the squad for the first time since November 2012 after battling back from a chronic bowel condition.

The 30-year-old has also returned to the Manchester United first team, but Scotland assistant manager Mark McGhee said that Fletcher was not a certain starter for Wednesday's friendly in Poland.

McGhee also insisted that Strachan had yet to decide whether Fletcher would regain the captaincy from Celtic midfielder Scott Brown.

However, Bannan was delighted that the man he regards as Scotland's natural leader is back in the fold.

"I was young when I first broke through and he was one I was kind of in awe of and looked up to," said the 24-year-old Crystal Palace midfielder.

"He made it so easy for me. It's good to have him back. He's the captain and the leader."

Bannan has found himself dropped to the Palace bench in recent weeks and realises he faces a battle to win a place in what he believes is a national squad that has improved since he made his debut in 2010.

"There's a lot of good players in this squad and some good players have been left out, so I would say it's the strongest so far," he said.

"Every game, you're fighting for your place. There's a lot of good players here. It's a strong squad now."

Wednesday's opponents are also in Scotland's group for the forthcoming Euro 2016 qualifiers and Bannan thinks there are many elements that make it more than just a normal friendly.

"We have had good results recently," he said. "We're riding high on confidence and hopefully we can keep that going.

"But it could give us that edge if we get one over on them and put a good performance on now."