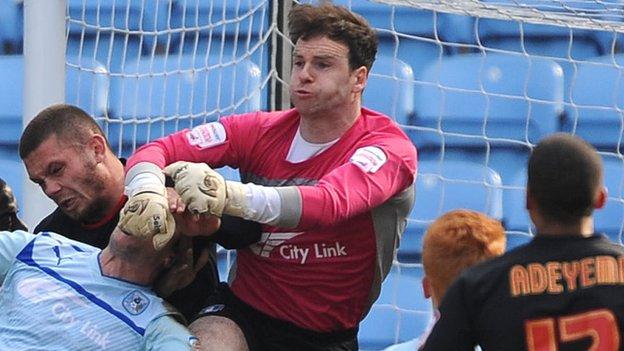 Coventry City keeper Joe Murphy has not given up on his international career despite being overlooked by Republic of Ireland manager Martin O'Neill.

The 31-year-old hoped he might be called up as a late replacement when Newcastle's Rob Elliot pulled out of Wednesday's friendly against Serbia.

But the Sky Blues keeper insisted: "Although I've only got two caps, I'd love to get more."

Murphy was with West Brom when he was given his first cap by then boss Mick McCarthy as a late substitute against Turkey at Lansdowne Road in September 2003.

And he was a Scunthorpe United player by the time Brian Kerr have him a second chance, again from the bench, against Algeria in May 2010.

Murphy fell out of favour under Giovanni Trapattoni after pulling out of a squad for family reasons, and he was hoping that O'Neill's appointment might allow him another chance.

But with Sunderland's Keiren Westwood still not yet back to full fitness following shoulder surgery, he did not get the nod to come in as third choice behind Millwall's David Forde and Birmingham City's Darren Randolph, to replace the uncapped Elliot.

Instead, Murphy will be playing for the Sky Blues at Walsall on Wednesday, and looking to build on a first clean sheet in three months against Shrewsbury Town.

But he told BBC Coventry & Warwickshire: "I'd love to be involved with Ireland again because it's the highest standard of football you can play. I'm not holding my breath but it would be nice.

"I might not be playing at the highest level, but I've only missed about 15 club games in the last six or seven year years, so hopefully that would hold me in good stead if something comes up in the future."

If all else fails, there is always the old boys' network, as Coventry goalkeeping coach Steve Ogrizovic is a contemporary of Republic counterpart Seamus McDonagh, who also worked under O'Neill at Aston Villa and Sunderland.

"Oggy knows the goalkeeping coach there, so I thought he'd put a good word in for me and maybe send him a bottle of whisky," joked Murphy.