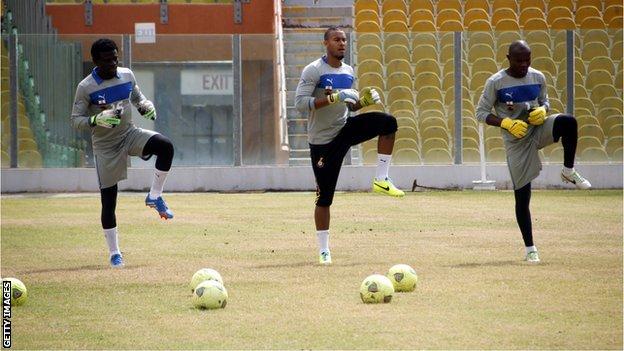 When Ghana coach Kwesi Appiah reveals the 23 men he will be taking to the 2014 world cup in Brazil, many will first look to see who he has picked for the three goalkeeping slots.

Squad announcements have always generated intense debate but the most passionate in a long while concerns a position that Ghana has struggled with in recent years.

Fatau Dauda, who has been first choice goalkeeper for a year now, was dropped for Ghana's friendly against Montenegro on 5 March but Appiah insists he simply wants to look at his options.

The man Dauda took over from as first choice, Adam Kwarasey, is also almost certain to be on the plane to Brazil and has been included in the squad to play in Podgroica, along with Stephen Adams.

The battle for the third slot looks likely to be between Adams, whose heroics at the African Nations Championship has made him a hot tip to make the side. ageing former number one Richard Kingson and former Under-20 international Daniel Agyei.

But the biggest question marks are over who will lay claim to the number one jersey as Appiah's first choice when the Black Stars kick off their campaign against United States on 16 June.

Appiah has said he feels he has time to make a decision and intends to make up his mind when Ghana gather for their pre-World Cup camp.

Until then the debate, which has been triggered by Dauda's lack of first-team opportunities with his club Orlando Pirates in South Africa, will continue.

Dauda's own view is that his current situation - he has made only one substitute appearance and started only one game in a year at the Soweto side - will not mean he is not ready to perform for Ghana on the big stage.

"Somebody can be playing week in week out but when it comes to the national team maybe he can't play," said the 28-year-old.

"Goalkeeping is about learning, you train and you learn. You are not remote controlled when you stand on the pitch."

Former Ghana international Abubakari Damba appears to agree with Dauda, although he questioned whether fitness and sharpness could be an issue.

"If your first choice international goalkeeper is not playing at club level it could be an issue in a major tournament but it depends on the level of the goalkeeper," Damba told BBC Sport.

"A goalkeeper may not be regular at club level but with his experience he can adjust to a major competition and deal with it fairly well.

"However, if it is entirely new terrain and the goalkeeper is not regular, he may not be physically prepared and that poses major problems for the team."

As well as those issues highlighted by Damba, there is also competition for Dauda to worry about with Kwarasey and Adams ready to fight to make the position their own.

Damba, though, is concerned that whoever Ghana opt for, they may not match the quality of some of the other stoppers who will be in Brazil.

In two of their group C matches Ghana will be faced with top-class keepers: they will have to find a way past Everton keeper Tim Howard if they are to beat the US, while Germany boast one of the most highly rated keepers in the world in Bayern Munich's Manuel Neuer.

"I don't think it is a problem for Ghana but it is a major challenge," Damba said.

"Every team's strength starts from defence and the goalkeeper plays an integral role. If you have a challenge with goalkeeping you have one with the whole team because he can win or lose games single-handedly."