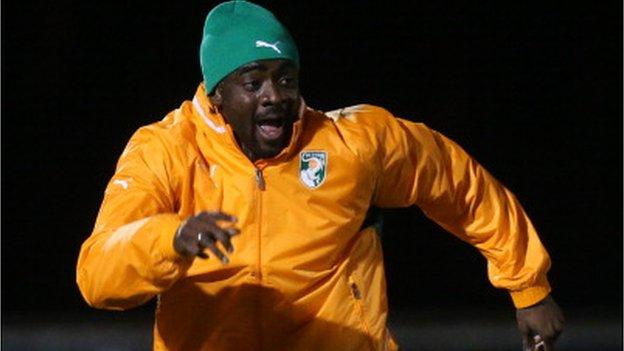 All five of Africa's World Cup finalists are in action this week as they continue their preparations for this summer's tournament in Brazil.

Continental champions Nigeria take on Mexico in Atlanta, USA on Wednesday but will be without recalled captain Joseph Yobo, who has pulled out because of an "undisclosed strain".

While the experienced Yobo misses out, there will be chances for new blood to impress with uncapped trio Imoh Ezekiel, Ramon Azeez and Michael Uchebo set to be given game time by coach Stephen Keshi.

Ghana travel to Montenegro and coach Kwesi Appiah will use the match to test out his goalkeeping options. He has dropped current first choice Fatau Dauda, who is struggling for games with his club Orlando Pirates, and included only Stephen Adams and Adam Kwarasey in the squad.

The Black Stars have, however, been boosted by the return to fitness of centre-backs John Boye and Jonathan Mensah.

Ageing Ivory Coast will take on Belgium in Brussels knowing that Brazil will be the last chance for many of their top stars to make an impact on the biggest international stage.

The likes of Didier Drogba, Yaya and Kolo Toure (pictured) and Dider Zokora have been some of the main men in what has been labelled the golden generation - a group of players who have been heavily tipped for success but haven't delivered.

Belgium are considered a dark horse for the World Cup, having qualified impressively - unbeaten and drawing only two of their 10 matches - and will provide a stern test for Sabri Lamouchi's side.

There is top European opposition for Cameroon, too, as the Indomitable Lions challenge themselves to keep Cristiano Ronaldo at bay in Leiria.

The only one of Africa's World Cup qualifiers to play at home this week is Algeria, who welcome Slovenia to Blida.

The Desert Foxes are keen to ensure they have are well prepared ahead of their second successive finals appearance and announced on Sunday that they have added another friendly to their build-up - a game against and will play Armenia in Geneva on 31 May.

They will, however, be without Sofiane Feghouli for the meeting with Slovenia - the playmaker will miss the game after undergoing dental surgery.

Elsewhere, there is a glamour tie for South Africa who will be visited by World Cup hosts Brazil in Johannesburg

While the game creates a buzz for fans, desperate to catch a glimpse of the five-time world champions, it also is a serious affair for under-fire Bafana Bafana coach Gordon Igesund.

He recently said he got "a vote of confidence" from the South Africa Football Association (Safa) after a long discussion over recent failures.

But reports in City Press newspaper quoted an unnamed Safa official saying: "Even if he (Igesund) beats Brazil 5-0 it will not help his case. The decision has already been taken that he should go."

However, Brazil coach Luiz Felipe Scolari said he is expecting a tough challenge against a South Africa side who beat world champions Spain 1-0 in November.