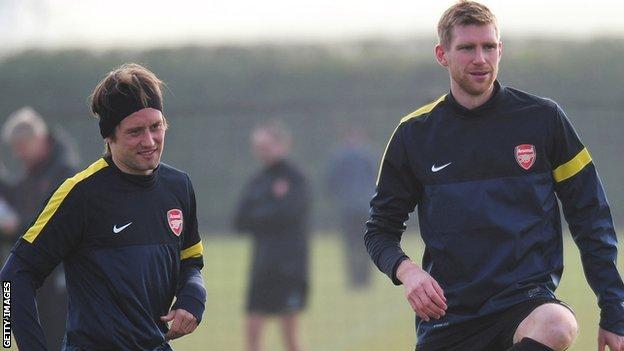 Mertesacker, 29, joined the Gunners from Werder Bremen in August 2011 and has played in 39 of the Premier League side's 42 games so far this season.

Rosicky, 33, joined from Borussia Dortmund in 2006 and would have been out of contract in the summer.

"They are players of exceptional quality and experience," Arsenal boss Arsene Wenger told the club's website.

"They have consistently proven themselves at the highest level.

"There is a great feeling of togetherness and belief in the group and this news will only help to strengthen this further."

Arsenal, who have not won a trophy since 2005, are third in the Premier League and host Everton in the quarter-finals of the FA Cup on Saturday.

"I'm really looking forward to having more years coming up with this fantastic club," said Germany international Mertesacker, who has captained the Gunners 16 times this season.

"It took me a while to realise I can be a main part of this squad. Now I want to show that. We need to get everyone ready at this club and get the best out of everyone."

Czech Republic international Rosicky said he signed a new deal because "I want to win the league with Arsenal".

He added: "It's my big goal and I will do everything I can to achieve it."