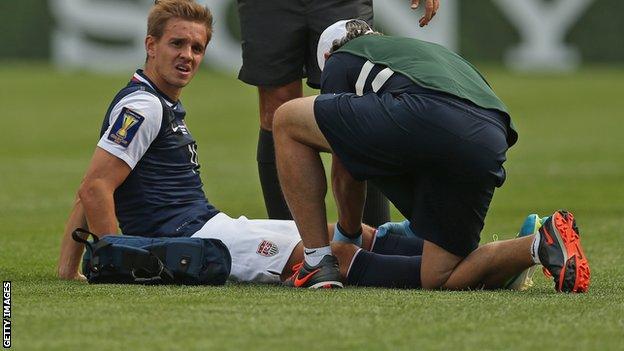 Bolton midfielder Stuart Holden has suffered a fresh setback in his comeback from a third serious knee injury, while playing for the reserves.

The 28-year-old lasted just 23 minutes in a specially arranged game against Everton at the Reebok Stadium.

Holden tore the cruciate ligament in his knee during the USA's Gold Cup final win against Panama in 2013.

Bolton say Holden will now return to the surgeon who completed the operation on his right knee last summer.

The former Houston Dynamo midfielder's first knee problem occurred in March 2011 when he was hurt in a Premier League match against Manchester United.

After six months out he returned to playing but it was then discovered he needed further surgery that kept him out for another 16 months.

Holden has been limited to just nine club appearances in the past two-and-a-half seasons because of his injuries, with his last Bolton start in April 2013.