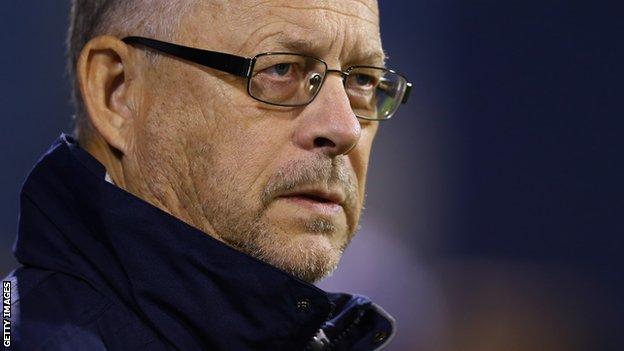 Iceland manager Lars Lagerback says he was close to becoming manager of Wales.

Lagerback, 65, was interviewed for the Wales position back in 2010 following the departure of John Toshack.

At the time he was considered a front-runner for the position alongside Ian Rush and current manager Chris Coleman, but ultimately lost out to Gary Speed.

"I know some of the guys at the Wales FA and they said I was pretty close," said Lagerback.

"But in the end the tradition was... having a Welsh national team coach,"

His side faces Chris Coleman's Wales in a friendly on Wednesday, but the Swede could have found himself in charge of Iceland's hosts.

But does he believe he could have led Wales to their first major tournament since 1958?

"It's difficult to say," said Lagerback.

"I always believe the possibilities exist if you have players that have some kind of experience. I think if you look upon the Iceland players... our five-six best players are equal with the Wales best players if you take away Bale."

Lagerback reveals his admiration for the Real Madrid winger, calling him an "interesting player" and noting that his team would have to play well to stop the threat that Bale poses.

He added: "It's no secret when you have players like him... if you have an individual who is quick you try to slow them down. That's the main thing."

Lagerback took charge of Iceland in 2011 and they came second in their World Cup qualifying group, missing out through a play-off defeat to Croatia.

Wales finished fifth in Group A as they also failed to qualify, but face Bosnia-Hercegovina, Belgium, Israel, Cyprus and Andorra in their Group B qualifiers for Euro 2016.

And Lagerback believes that the team he almost managed has the potential to qualify for the tournament finals.

"They definitely have a chance - a good chance in my opinion." he said.