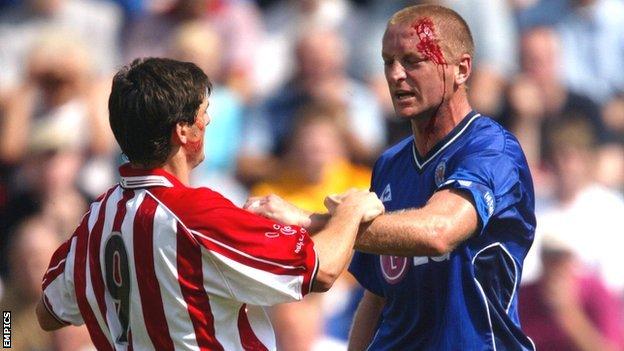 "It's not an irregular thing to turn up to training and see 250 soldiers with machine guns and rocket launchers on their shoulders parading where we should be running around trying to hone our football skills," Elliot explains matter-of-factly. 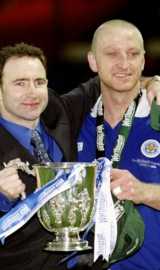 Epsom and Ewell and beyond...

Elliott was born in Epsom in Surrey and began his career playing non-league football for his hometown club.

He joined Leicester City for £1.6m in January 1997 and stayed for eight years before a knee injury forced his retirement in 2005.

Elliott would often be pushed up front if City were behind late on in games and he scored 36 goals in 290 games during one of the most successful periods in the club's history. He also scored both goals in the League Cup final win over Tranmere Rovers in 2000.

The towering defender also won 18 international caps for Scotland, having qualified to represent them through a Scottish grandmother.

Elliott was assistant manager of Hednesford Town in 2008 and was part of the coaching set-up at Oadby Town in 2009. Elliott also had four months in charge of Stafford Rangers in 2011 before returning to Leicester to coach.

The 45-year-old ex-Scotland international, a bruising and uncompromising defender in his playing days, has only been managing in Thailand's top flight for four months.

But he has already got used to doing so against a backdrop of protests, political unrest and uncertainty that confirms Bill Shankly's oft-repeated and much-celebrated "Life or Death" football quote as nonsense.

"It is a reasonably regular thing from what I can gather from everyone here," he told BBC Sport.

"Admittedly, it is a little more intense at the moment than it is usually, but it is not uncommon for there to be political unrest out here, so people just get on with day-to-day activities as normal.

"There are certain areas within the town that, while they are not necessarily no-go areas, are just a hassle to get to - or get through.

"It doesn't really affect us. The Army Stadium is 10 minutes or so outside the downtown part of Bangkok so is always reachable."

But as much as Elliott tries to focus on his football, there's a chilling acknowledgement.

"Although, having said that," he added, "it was closed one day when the present Prime Minister held a meeting there and there were big protests outside - someone got killed on that day."

How Elliott, who spent eight years as a Leicester player from 1997 and famously scored both goals in the 2000 League Cup final win over Tranmere Rovers, ended up in Thailand still seems a slight shock.

Having retired as a player in 2005, he went on to have brief spells coaching and managing in non-league, before most recently returning to coach at the Leicester academy.

It was that link that led to his unexpected move, when academy director Jon Rudkin was asked to recommend someone who could take over as head coach at Army United.

Elliott's playing pedigree, background, coaching credentials and link with Leicester and their Thai owners made him a compelling candidate.

"They say football is an unusual sport - anything can happen at any time, and that was certainly the case with myself," he said.

He is clearly enjoying the change, the challenge - and the experience - and has not ruled out making the stay an extended one.

The set-up and army links and all that brings just takes some getting used to.

"All the players previously, three or four years ago, were actual soldiers themselves," he explained. "That is still the case up to a point, although there are some foreign players that have been brought in amongst other regular Thai professional footballers."

Buriram United are the Premier League Champions and are aiming for a third consecutive title.

The Thai Premier League is growing in popularity and has developed a bigger following in the last couple of years. The biggest star is Teerasil Dangda, who plays for Muang Thong UTD. He will go on a one-year loan to Spanish club UD Almeria.

Teeratep Winothai, who plays for Bangkok Glass, was tipped to become a superstar as a youth player. He was with Crystal Palace and studied at Brentwood School, a private school in Essex. During this time he represented the Thai national team at schoolboy level and his performances for his school helped them reach the final of the 2001 Independent Schools FA Cup, scoring eight goals in four games along the way. He also spent a year with Everton before returning to Thailand.

The team, considered one of the 20-strong league's mid-table sides, have still managed a decent beginning to life under Elliott.

But while pleased with early progress and the basic skill level, Elliott believes there is much to learn about tactics and approach.

He added: "We just started the season last Sunday and got a good victory to get the season rolling, which is encouraging.

"Ability-wise the level is probably higher than people would imaging in terms of pure footballing ability.

"It is more the placing structure and understanding of the game a little bit out here, which is one of the reasons that people like myself have been brought out here to implement that.

"The Thai people generally think their football is at a quite high standard, and in some aspects it definitely is. It's not so high in other aspects, but it's a different culture and different type of football as well. It's hard to equate really."

And of course, the interruptions and unusual distractions don't help either.

"It is quite bizarre at times," he added. "There are army duties and parades and ceremonies that often get in the way, but you learn to live with that. It can get slightly frustrating initially, but you realise it is what it is, and take the rough with the smooth.

"We've had training either cancelled or re-arranged for a number of issues. One of which being a helicopter had to be landed on the training pitch."

That never happened at Filbert Street.